When British composer Gustav Holst wrote "The Planets" nearly a century ago, the way we imagined our solar system took on new life and grandeur.

Inspired by astrology, not astronomy, the seven-movement orchestral suite brought shape and beauty to seven planets in our galaxy. [Pluto, which hadn't yet been discovered, and Earth were left out, notes CBS News correspondent Serena Altschul.]

To this day, Holst's seminal work - recorded countless times - conjures up stunning images in our minds.

"This is music born to have pictures with it," said Houston Symphony music director Hans Graf.

But our imaginations can rest easy: Now, there are real and truly glorious visuals to accompany the score.

Conductor Graf has partnered the Houston Symphony with nearby NASA to match the composition with art.

"Some music doesn't lend itself to it at all, some music allows it. And some music cries out for it," he said.

And "The Planets" does just that.

So in 2006, Graf and NASA began gathering pictures from space.

Astronaut John Grunsfeld led NASA's side of the project.

"What's so amazing about the cameras that we're putting in space are they're not the little five megapixel or, you know, even eight megapixel cameras that you can get at Wal-mart," he said. "These are very high-tech, some of them quite large, very special lenses.

"For the pictures that we get from our spacecraft of planets in our solar system, it's a real sense of incredible awe - How could they really be so beautiful?"

It was British filmmaker Duncan Copp's job to search through tens of thousands of the beautiful images and animations and tell a story.

"I go through them and pick the ones that I thought were most aesthetically pleasing and then cut them to the music," Copp said. "But all the moves have to be created separately."

He described the resolution of the NASA images as "unbelievable."

"I mean, this is another world!" he said. 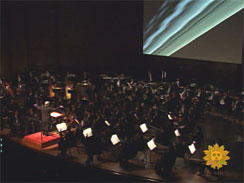 (CBS)
That world has become a film that Hans Graf plays while conducting the orchestra.

To create the perfect atmosphere for the 2,100 concertgoers, the symphony uses a massive 24-foot high-definition screen above the musicians to project the images.

With the lights down low, "The Planets" come to life.

For some it was the music, others the imagery, that made opening night in Houston the hottest ticket in town.

Grunsfeld was on hand to return the maestro's personal baton after taking it with him to space.

Then, it was show time, and the opening movement, "Mars, the Bringer of War."

"You can't have a stronger music, more testosterone in orchestral music, than in 'Mars,'" Graf said.

And the grand "Jupiter, the Bringer of Jollity."

And "Saturn, the Bringer of Old Age."

"Visually, Saturn, you can't beat it. No human imagination could figure out such a beautiful thing," Graf said.

With the last of the symphonic suite's pieces, "Neptune, the Mystic," the concert left many audience members in awe.

"I thought it was wonderful tonight," said one man. "The music just brings it alive where you almost, you know, you felt like you were there."

After four shows in Houston and a performance at New York's Carnegie Hall, the symphony takes the show to Europe later this year.

For this 21st century classical music experience, it seems, the planets are aligning . . .

"If you listen to Holst's 'The Planets' and close your eyes, you know, you can imagine all kinds of, you know, far-out scenes," said NASA's Grunsfeld.

"Yeah, it's a journey," said Altschul.

But, says the astronaut, "The real images are even better."

For more info:
"The Planets: An HD Odyssey" (available on DVD and Blu-ray)