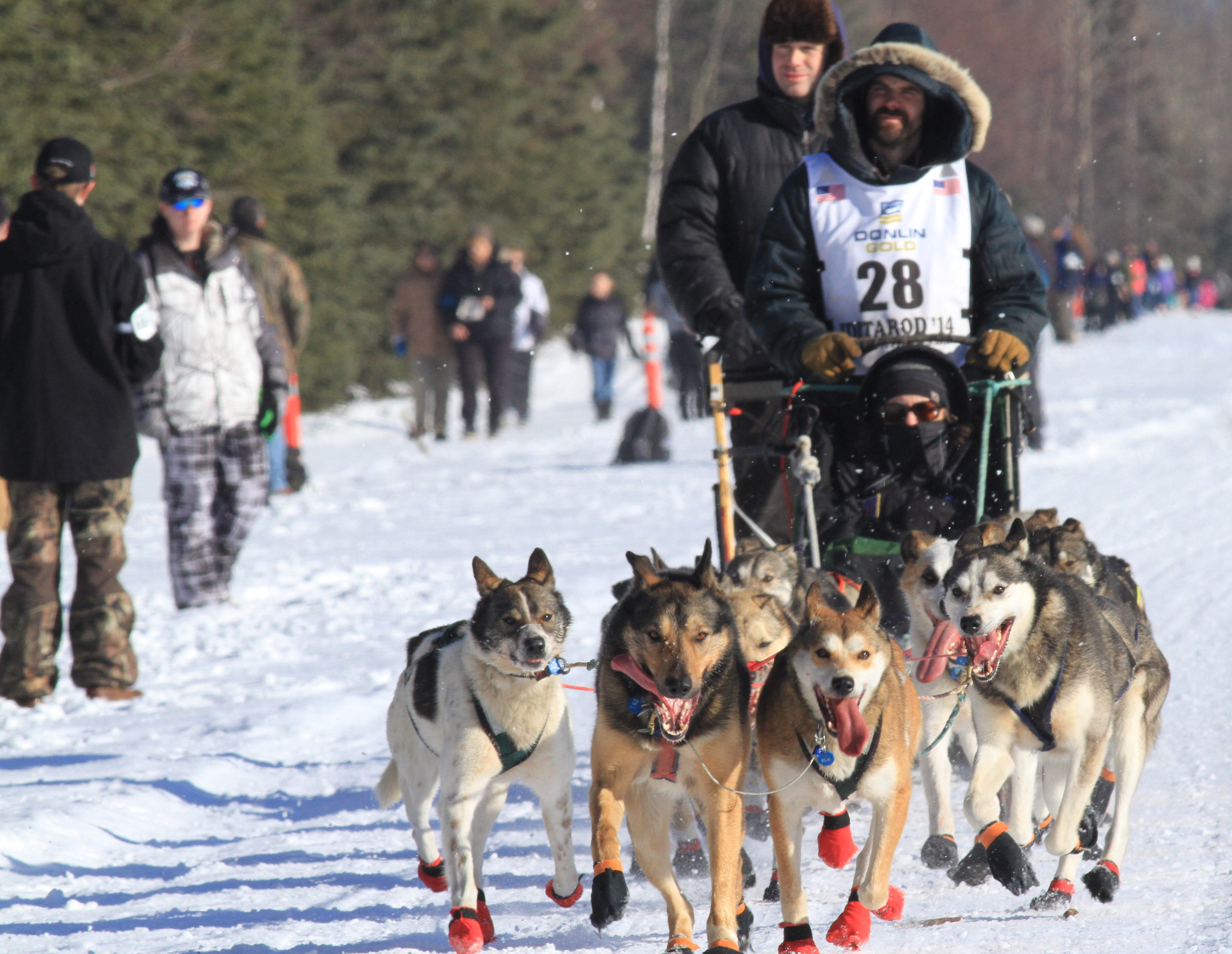 WILLOW, Alaska - A New Zealander was the first musher en route to the town of Nome when the Iditarod Trail Sled Dog Race began Sunday.

Curt Perano and 68 other mushers began the world's most famous sled-dog race by crossing frozen Willow Lake about 50 miles north of Anchorage.

It was a staggered start, meaning one musher left every two minutes. The order was drawn at a musher's banquet Thursday night in Anchorage.

Among those in the field are Mitch Seavey, last year's champion, and his son, Dallas Seavey, the 2012 winner.

"The last two winners might create more media interest," Dallas Seavey said before the race started. "But it doesn't mean that we're necessarily the two most competitive racers this year."

Adding to the uncertainty of this year's race is an influx of Scandinavian mushers, including two-time champion Robert Sorlie.

"I don't think we're trying to take it over," Sorlie said.

Instead, there are so many Scandinavians here because the Iditarod is the world standard for long-distance dog races, he said.

The influx of five Norwegians, or "invasion" as Yvonne Dabakk of Oslo described it, is likely just a coincidence, she said.

Dabakk said she believes all had independent plans to race the Iditarod, "and it was this year."

She is a rookie this year, and she wants the prize given to all first-year mushers to finish the race: a belt buckle.

If she gets it, the buckle goes to her husband. "Without him, I couldn't be on the trail line at all, so I'm going to get him a buckle," Dabakk said.

Aaron Burmeister wants to be the first musher from Nome to win the Iditarod.

"We haven't had a winner from Nome yet. I'm working as hard as I can to be able to do that," he said.

Burmeister welcomes the return of the Norwegian mushers because they bring more competition to the race.

"When I win the Iditarod, I want to have the best competition in the world there," Burmeister said.

The trail conditions could prove to be an advantage for one musher's wife.

Allen Moore of Two Rivers, Alaska, last month won his second consecutive Yukon Quest International Sled Dog Race. The conditions now are the same as they were for the start of the Quest, he said.

His wife, musher Aliy Zirkle, will be using this team on the race while Moore races other dogs.

Zirkle has finished second in the Iditarod the last two years, and her team might give her the needed boost this year because trail familiarity in the Yukon Quest.

"Our dogs have gone over 1,000 miles, and they know what to expect," Moore said

Newton Marshall of St. Anne, Jamaica, is another international musher at the race. He's competing in his fourth Iditarod.

Marshall's race strategy is simple: He just wants to finish the race. He plans to take it slow and simple "and get to Nome," he said.

When asked how his team looks, Marshall said: "My team looks ... I'll find out on the trail."

The Sunday event in Willow followed a ceremonial start Saturday in downtown Anchorage. At that fan-friendly event, mushers talked to people and had their pictures taken for hours before taking their sleds on a leisurely 11-mile run on urban trails in the city.

The race turned serious Sunday. The Iditarod had a late-afternoon start so fans from Fairbanks could get there.

It was a beautiful day for fans at the restart of the race, with temperatures in the high teens.

Noble and his wife and son have attended for years because they help musher Jessie Royer.

Another fan at the race, volunteering to work security, was Adam Redmon of Waynesville. N.C.

Redmon said he and his wife put bucket-list vacation ideas into a teapot.

"We just reached in there New Year's and picked it out," he said. "It was just meant to be."

The colder temperatures didn't bother Redmon, who will graduate with a business administration degree in May. He started college after serving in the military.

"It's been colder back home," he said. "Golly, I'm not even wearing gloves."