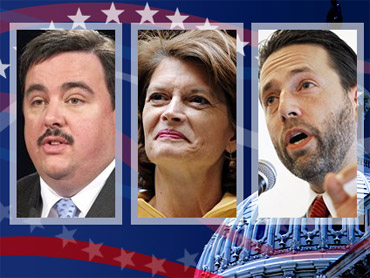 The Alaska Senate race is headed for another nailbiter in the rematch between Sen. Lisa Murkowski and Tea Party favorite Joe Miller.

With 384 of 483 precincts reporting early Wednesday, write-ins had about 40 percent of the vote, according to CBS News' Alaska election results.

Miller, who beat Murkowski for the GOP nomination in August by just 2,006 votes, received 35 percent. Democrat Scott McAdams had about 24 percent and all but conceded.

The write-in count only speaks to total ballots cast for write-ins - not to names written on them. But Murkowski appeared confident.

However, Miller said lawyers and other supporters were ready to head to Alaska for the ballot count and a legal battle might be looming.

Murkowski said her campaign was prepared to make sure that every vote was recorded, and that no Alaskan is disenfranchised.

Regardless of who wins, the outcome will have special, even historic, significance, says CBS News correspondent John Blackstone. If Miller comes out on top, it will be a victory for the Tea Party and for one of Miller's big supporters, former Alaska Gov. Sarah Palin.

Did the Tea Party Cost GOP the Senate?

If Murkowski wins, it will be the first time since 1954 that a write-in candidate has won a seat in the U.S. Senate. Murkowski's name is well known in Alaska. Her father served as both a senator and governor, and she has been a senator for eight years.

Blackstone reports that election officials say counting the write-ins may not actually start for two weeks, in order to give time to collect absentee ballots mailed in from across the state.

Voters may not know for weeks who won the Senate seat.