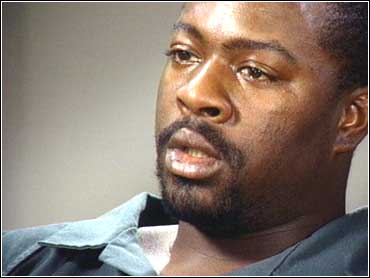 On Feb. 29, a 6-year-old boy shot and killed classmate Kayla Rolland at their elementary school outside Flint, Michigan.

Now Michigan authorities must decide what to do with a murderer who may not understand his crime. Is he dangerous? Should he be locked up? Or should he be sent home to his family? 60 Minutes II Correspondent Scott Pelley reports.

The moment after the shot the first-grade teacher grabbed a cell phone and called 911.

Soon the killing was in the news. Parents knew there had been a shooting but did not know who was involved.

Among the anxious parents was Dedric Owens, who was listening to his radio in the Genesee County jail, where he is being held for violating parole after serving time for drug trafficking and burglary.

"I was listening to my radio about the school shooting," Owens says. "When I heard them mention the name of the school, that's when I started worrying. Because all my kids go to this school, I had a gut feeling that something wasn't right. And when I called home, my mom told me that it was my little boy."

Indeed his little boy had pulled the trigger.

His son sometimes seemed angry, according to Owens. He doesn't know why but he suspects that his son may be reacting to his absence. Owens was sent to jail when his son was 2 years old.

When Owens wasn't in jail, he was with his wife and three kids. From this house, he and the boy's grandmother ran the family business: selling crack. "The day the boy was born he went from hospital to crack house," says one investigator. "He never had a chance."

"This little guy was living in a very chaotic environment, one in which there were drugs, guns; there were people coming in and out of his house all the time," says Arthur Busch, the county prosecutor.

The boy's mother, Tamarla Owens, is involved with drugs. One week before the murder she was evicted from her home. She sent her two boys to live with their uncle, someone police say was also running a crack house. The murder weapon was stolen in a burglary, then traded at the house for drugs, Busch says.

"I can't imagine a worse environment for a little boy to grow up in or be around," Busch says. "It appears to me that he's assimilated much of what he saw, the emulation of 'I'm the man; I've got the gun.'"

Teachers had identified the boy as "high risk." This year the school put him in a new counseling program designed to intervene early in the lives of troubled children.

Most of the boy's records are sealed to protect his privacy. But there are signs the program wasn't working. Not long before the shooting he was suspended three days or fighting. The day before the murder he argued with Kayla.

Busch can't charge the boy with a crime as a juvenile delinquent because the child is too young to understand death and to have intended murder, Busch says. The boy may have seen the gun as a toy, Busch adds.

"I believe it may have been the only toy he owned," Busch says. "You're talking about young children in an environment where the only thing (seen was) dope and guns and a few bottles or liters of pop. We're dealing with a 6-year-old not a 19-year-old. We're dealing with somebody who still believes in Santa Claus and (the) Easter Bunny."

"Now, I can't imagine with that maturity level that somebody would intentionally plan to murder another person," he says.

But Genessee County Sheriff Robert Pickell says the boy is still dangerous. "If they say he doesn't know what he did, and let's assume that's true, he won't know if he does it again," he says.

Pickell believes that the boy should be held responsible for the crime. Says Pickell: "Whether or not he had intent, or whether or not he can form intent, the fact is we've got a little girl that's dead, just as if a 40-year-old man had pulled the trigger."

The parents have temporarily lost custody of their son. At a hearing the day after the murder the boy was sent to live with his maternal aunt. Pickell says the boy should be taken from his family and put under professional care.

As surprising as the shooting incident may seem, some experts say that young children bring guns to school regularly.

"Maybe once a month a little boy somewhere probably brings a gun to school, even a nursery school," says James Garbarino, a professor of human development at Cornell University who has spent 25 years studying violent children.

In 1998 alone, 339 elementary school students were expelled for bringing weapons to school, according to a report by the Department of Education.


The boy in Michigan can almost certainly be saved, Professor Garbarino says. "A boy that young is still very malleable no matter what he's done."

"He's still very changeable. But he won't automatically change. If you simply turn him loose and say, 'Have a nice day' and, 'Don't do this again,' you can almost guarantee that he'll go back to this pattern of aggression. And maybe there'll be another murder down the line," Gabarino says.

The Buell school murder echoes another Flint case. In 1985, an 8-year-old named Brit Kellum got into a fight with his brother and ended up killing him with a shotgun.

The prosecutor decided Brit was too young to understand what he had done. So thboy was sent back home. Four years later - at the age of 12 - he shot and killed his other brother.

Setting him free after the first murder was a mistake, says Bruce Newman, the judge who presided over the second trial: It gave the boy the message that he could kill without consequences. Kellum was convicted and sent to a prison for juveniles. He was released when he turned 21. Since then he has not "re-offended," Newman says.

The key in this case, says Busch, is what happens next. "(The boy) is going to grow up in our society, and the way we treat him now will define what he is later."

More than four years ago, a judge sentenced the father, Dedric Owens, for possession of crack. At the end of the hearing, the judge told Owens to be a responsible father, or his children would end up following the same path.

Owens plans to ask for custody of his son in two weeks. The judge must decide whether the boy stays with family, goes to foster care or is put into a state facility.

"I think this little boy needs a fresh start and a new beginning," Busch says. "(A) new beginning and fresh start can only be given by one person, and that's the judge. And we're going to be watching what he's doing, and we'll be praying that he has wisdom, because he's going to need it in this case."

A Prescription For Death?

Choose The Sex Of Your Baby