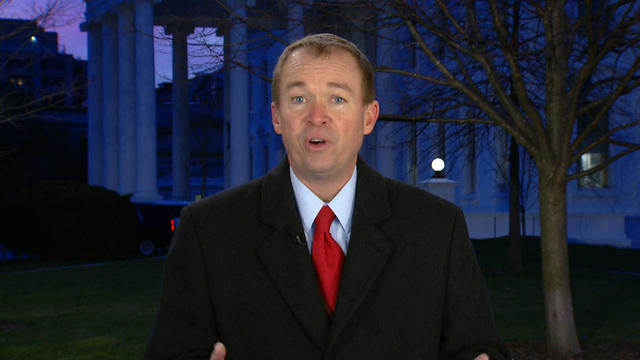 Mick Mulvaney, President Donald Trump’s budget director, said Friday on “CBS This Morning” that Americans worried about cuts to essential services in the GOP health care bill should worry about fixing things at the state level.

Mulvaney said the GOP health care plan, formally known as the American Health Care Act, would allow states to decide what is covered by insurance plans.

“States not only have the ability to require those services, many of them already do,” Mulvaney said. “I talked to some folks in the northeast and they say we don’t really mind that much about essential health benefits because our states already require insurance policies sold in those states to have that. What we’re doing is taking away the federal controls of these systems.”

When pressed as to what people should do if they don’t live in a state that requires that companies cover essential services, such as maternity care, Mulvaney said “figure out a way to change the state” that they live in.

“They could try to change their own state legislatures and their state laws,” Mulvaney said. “Why do we look to the federal government to try to fix our local problems? That’s one of the big problems of Obamacare. It took that one-size-fits-all and crammed it down on the entire country. As a result, you have a system where everybody, just about, can afford to have insurance, but nobody can afford to actually go to the doctor and that’s what we’re trying to fix and that’s what the House bill does.”

Mulvaney also pushed back on the idea that, should the health care bill fail to pass Congress, the rest of the president’s agenda would be in jeopardy.