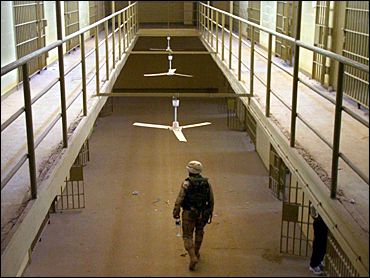 Even before the pictures surfaced, the U.S. military did a "top-level review" last fall of how its detention centers in Iraq were run, a Pentagon official said.

Di Rita did not say what prompted the review. He said its conclusions were taken into account by Maj. Gen. Antonio Taguba, who began an investigation on Jan. 31 focused on an unidentified soldier's report of prisoner mistreatment at Abu Ghraib prison.

Di Rita did not disclose the earlier review's findings, and he said he could not disclose what Taguba found because his report is classified secret and is under review by senior officials.

The military has described the pictures as the "misdeeds of a few." But now, reports CBS News National Security Correspondent David Martin, investigators are wondering how many people knew what was going on at the Abu Ghraib prison outside Baghdad.

Taguba's led to findings of blatant and sadistic abuse by U.S. military police and perhaps others. Reports have said the Taguba probe found that military police were instructed by military intelligence officers to soften up the Iraqi prisoners to make them more compliant during interrogations.

"They are trying to make it look like this was typical of our operations," Karpinksi told Martin. "I think there's a shared responsibility that's not being mentioned."

Long before he was charged with any crime, Sgt. Chip Frederick, one of the guards now facing court martial, sent e-mails home saying, "military intelligence has... told us great job... We help getting them - the prisoners — to talk with the way we handle them."

Di Rita said allegations of abuse at Abu Ghraib first came to the attention of commanders in Iraq when an unidentified soldier reported it to his superiors on Jan. 13. The next day, Sanchez ordered a criminal investigation, and since then four other probes have begun, Di Rita said.

In early February, the Army inspector general began a review of U.S. detention facilities throughout Iraq and Afghanistan, at about the time the chief of the Army Reserve, Lt. Gen. James R. Helmly, began an assessment of training for his MPs and military intelligence personnel, Di Rita said.

A criminal investigation of the Abu Ghraib case was completed on March 15, Di Rita said. On March 20, criminal charges were filed against six military police. As many as three of the six cases has been referred to military trial, and others are in various stages of preliminary hearings, officials said.

In addition to the criminal cases, seven others — all military police — have been given noncriminal punishment — in six of the cases they got letters of reprimand. It was unclear whether others, including those in military intelligence, will face disciplinary action. The names of the seven have not been made public.

Rumsfeld has not read the internal Army report that spelled out abuses at one prison in Iraq, officials said Monday, although they said he has kept abreast of the allegations that Iraqi prisoners have been mistreated.

Rumsfeld has been publicly silent on the controversy since it began when the broadcast the photographs.

Air Force Gen. Richard Myers, chairman of the Joint Chiefs of Staff, said on Sunday that he also had not read the report.

The White House, mindful of the fallout, said Mr. Bush had called Rumsfeld before leaving on a campaign trip Monday and checked on the status of the Defense Department investigation.

"The president wanted to make sure appropriate action is being taken against those responsible for these shameful and appalling acts," said spokesman Scott McClellan.

Mr. Bush, in an interview Monday with The Detroit News, the Detroit Free Press and Booth Newspapers, said he had been "shaken" by the reports of prisoner abuse "because I know that this doesn't reflect the values of our country."

The British newspaper The Daily Mirror has published photos said to show a hooded Iraqi being pushed, threatened and urinated on by a British soldier. The British military police are investigating and have not commented on the authenticity of the pictures.

The U.N. special investigator on torture, Theo van Boven, issued a statement late Monday expressing serious concern about the reports of torture and "other cruel, inhuman or degrading treatment" of Iraqis detained by U.S. and British forces.
A Canadian civilian says in a lawsuit that he was tortured by U.S. troops in Iraq and saw Iraqi prisoners suffer even worse mistreatment.

Portland lawyer Thomas Nelson said he filed the suit with the U.S. Army Claims Office on April 30 on behalf of Hossam Shaltout, 57, of Los Angeles. Shaltout claims he was beaten after being taken to the Camp Bucca detention center shortly after the launch of the U.S.-led invasion.