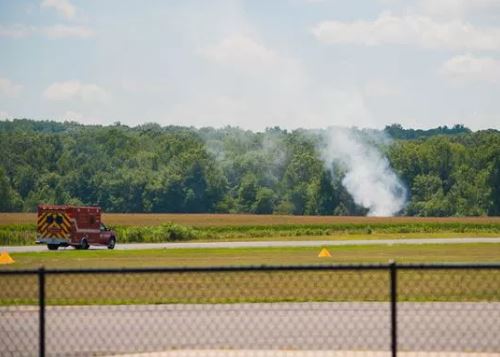 Shocked witnesses on a train going by the crash site described the plane in flames and said it had been completely destroyed.

Officials told CBS affiliate WTVR the plane was attempting to land at the airport at 12:26 p.m. when it came to the end of the runway and pulled back up.

"The plane made it beyond the railroad tracks at the end of the airport property, banked left and struck the tree line," Virginia State Police Public Relations Director Corinne N. Geller said. "The plane crashed in the trees and immediately caught fire."

The plane came to the end of the runway at the Shannon Airport near Fredericksburg and then pulled back up, flying to the end of the airport property, State Police Spokeswoman Corinne Geller said in an email. It struck the tree line, crashed and immediately caught fire.

All six people killed were from out of state and their bodies will go to the chief medical examiner's office in Richmond for positive identification, Geller said. Their names won't be released until police have notified the next of kin.

Tanya Aquino of Washington was on an Amtrak train to Richmond when the train stopped. A conductor first said there was a fire, then said there had been a plane crash.

The train rode past the crash site and Aquino said she saw flames, smoke, several rescue vehicles and the remains of the plane just beyond the tree line.

"When I heard there was a fire, it was such a hot day, I was hoping it was just a brush fire," Aquino said. "It looked so terrible the way the plane had landed."

The Federal Aviation Administration and the National Transportation Safety Board are investigating.

Shari Acree, who was also on the train, said she saw white smoke and the crash.

"The plane was completely decimated and there was still some flame coming from it," Acree said in an email.

The airport has an average of 85 flights per day, mostly local general aviation. Ninety-one aircraft are based there, most of them are single-engine.