"Mr. Chairman, speaking for myself and myself only, it is my personal belief that allowing gays and lesbians to serve openly would be the right thing to do," Mullen said. "No matter how I look at the issue, I cannot escape being troubled by the fact that we have in place a policy which forces young men and women to lie about who they are in order to defend their fellow citizens."

"For me, personally, it comes down to integrity -- theirs as individuals and ours as an institution," he said.

"I also believe that the great young men and women of our military can and would accommodate such a change," continued Mullen. "I never underestimate their ability to adapt."

The military commander went on to acknowledge that he does "not know this for a fact, nor do I know for a fact how we would best make such a major policy change in a time of two wars."

"That there will be some disruption in the force I cannot deny," he said. "That there will be legal, social and perhaps even infrastructure changes to be made certainly seem plausible. We would all like to have a better handle on these types of concerns. And this is what our review will offer." 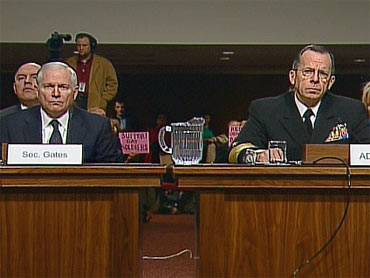 (CBS)
The review referenced by Mullen is a working group announced by Defense Secretary Robert Gates. It is tasked with "thoroughly, methodically and objectively" examining how to end the policy responsibly.

CBS News chief national security correspondent David Martin reports that while 428 gays were discharged last year, Defense Secretary Gates made it sound like it is no longer a question of if gays can serve openly but when.

"The question before us is not whether the military prepares to make this change but how we best prepare for it," Gates said.

The review will be lead by Pentagon counsel Jeh Johnson and Gen. Carter Ham, the leader of Army forces in Europe. Though President Obama said in his State of the Union address last week he wants to work with Congress and the military to end the policy "this year," the working group is not required to finish its review until December, which diminishes the chances of repeal this year.

Gates, a Republican first appointed under President George W. Bush, said the 11-month timeframe was necessary to ensure there was adequate time "for the thorough examination" of the issues involved. The "Don't Ask, Don't Tell" policy was first instituted under President Bill Clinton in 1993, following fierce debate in Congress.

Mr. Obama has been criticized by gay rights groups for not moving quickly enough on gay issues, and repeal of the military policy has been among their top priorities.

But even with Democrats firmly in control of Congress, it is not clear that there are sufficient votes in either the House or Senate to pass legislation to repeal the policy. And likely Republican gains in the November midterm elections could further complicate the path to passage. 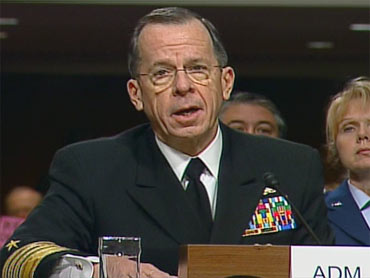 (CBS)
Still, Mullen's comments provide cover for both members of the military and lawmakers to publicly support repeal, and they could ultimately influence the debate.

Republicans on the Armed Services Committee, led by Sen. John McCain, signaled disappointment with the testimony. McCain criticized Gates for saying the military is examining "not whether the military prepares to make this change, but how we best prepare for" repeal, in accordance with "our orders from our commander in chief."

The former Republican presidential nominee stressed that only Congress has the power to repeal the law and complained of efforts to do so by the military leaders "in many respects by fiat." He suggested their assessment was "clearly biased" about a policy that he believes to be effective.

The position seemed to mark a shift by McCain, who three years ago said "the day that the leadership of the military comes to me and says, 'Senator, we ought to change the policy,' then I think we ought to consider seriously changing it because those leaders in the military are the ones we give the responsibility to."

Pressed on the issue by Republican Sen. Jeff Sessions, Mullen said he has "served with homosexuals since 1968." He said there "are a number of things cumulatively" that led him to support allowing gays to serve openly.

"This is about leadership, and I take that very, very seriously," he added. Later, Mullen tweeted this: "Stand by what I said: Allowing homosexuals to serve openly is the right thing to do. Comes down to integrity."

Democrats largely backed Mullen's comments and the rest of the testimony, with Sen. Mark Udall quoting Barry Goldwater's comment that "you don't have to be straight to shoot straight." Sen. Carl Levin, the chair of the Armed Services Committee and a strong supporter of ending the policy, has suggested repeal language could be included in a defense spending authorization bill.

Gates urged lawmakers to keep their rhetoric to a minimum while the review is underway, arguing they should "keep the impact it will have on our forces firmly in mind."

He also said the military is, in the short term, planning to effectively loosen the "Don't Ask, Don't Tell" policy by reducing "instances in which a person is outed by a third person," which he said could be done under the current law.

A 45-day review is being undertaken to examine such a shift.

"When the Chairman of the Joint Chiefs of Staff and the Secretary of Defense, who also served under President Bush, direct the military to mitigate the pace of discharges while moving toward implementation, we know that "Don't Ask, Don't Tell" is on its way out," Joe Solmonese, president of hte gay rights group the Human Rights Campaign, said in a statement following the testimony.