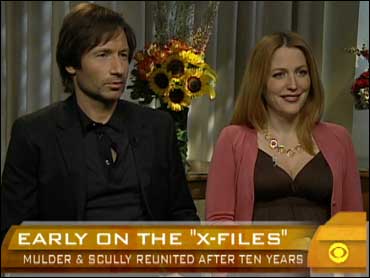 It's been six years since David Duchovny as Fox Mulder and Gillian Anderson as Dana Scully teamed up in the television series "The X-Files."

Now they're back together again in the feature film "The X-Files: I Want To Beileve." As in the television series, they'll be investigating the paranormal, uncovering dark and foreboding secrets along the way.

In their first broadcast interview in a decade, Duchovny and Anderson tried their best not to reveal the biggest secret of all: how deep does their relationship go in the new movie?

"They've had six years in between when we last saw them, and when we see them now," Duchovny told People executive editor and Early Show entertainment contributor Jess Cagle "And they've been together in some capacity. It's not like they've split up. That's what's interesting about the movie is that kind of maturing relationship within a thriller."

Anderson admitted that Mudler and Scully's relationship is not very conventional.

"That relationship was so intimate for so many years," Anderson said. "The friendship and the camaraderie and the love that these people shared for each other goes beyond any paper they'll sign or any sex scene. It's so much deeper than all of that. They should just, you know, leave it alone."

The studio is taking great pains to reveal as little as possible by only releasing one promotional clip featuring Scully and Mulder together.

Both actors have made a point to show other sides of their talents since "The X-Files" went off the air.

Anderson won acclaim for stage work and movies like "The Last King of Scotland." Duchovny won a Golden Globe for playing a washed-up writer in the Showtime series "Californication."

Despite their successes and a lot of time spent removed from their roles, both Duchovny and Anderson weren't reluctant to revisit their characters.

"It's a character that I love," Duchovny said. "It's a show that I love. And I love working on it with Gillian and the people. And all those questions about typecasting and everything that used to dog us. That was the question we got more than anything."

In truth, Duchovny and Anderson have managed to avoid being typecast by their "X-Files" roles. And since their on-screen chemistry is so clear, maybe that means they'll welcome more "X-Files" movies in the future.

"Like in life you have chemistry with people. You also have that as an actor, and you don't have any control over it as in life," Duchovny said. "We were lucky."

Duchovny and Anderson say this movie will satisfy all hard-core fans of "The X-Files." But, according to Cagle, novices will enjoy the movie just as much.