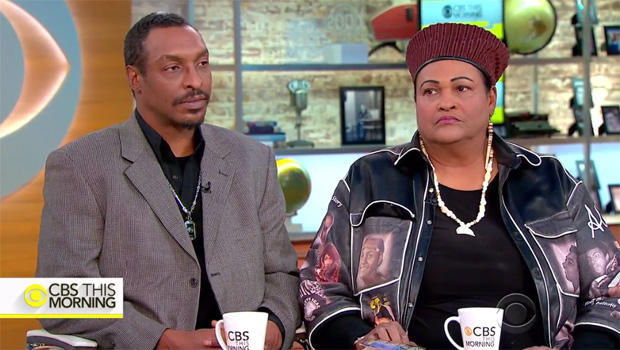 The son of the late three-time heavyweight champion and humanitarian Muhammad Ali said he was a target of religious profiling when he was stopped and questioned by U.S. immigration agents earlier this month while traveling from Jamaica with his mother.

Appearing on “CBS This Morning” Monday, Muhammad Ali Jr. and his mother, Khalilah Camacho Ali, said that they had just arrived at Fort Lauderdale-Hollywood International Airport on February 7, and were headed toward baggage claim when they were stopped. Both were in wheelchairs, because of their knees.

“Immigration came up to me and pulled me aside and asked me my name first and I said ‘Muhammad Ali.’ And he said, ‘What religion are you?’ And I said, ‘Muslim.’ He said, ‘Come with me.’

Muhammad continued, “So he took me to another room - it’s like he didn’t believe me or whatever, but he asked me again, ‘What is your name and what is your religion?’ And again I answered.

He was questioned for about an hour and 45 minutes.

“They asked me about my birthday. They asked me where was I traveling to, what route I come from. And I was like, ‘What difference does it make? I’m a U.S. citizen. You see my ID, you see my passport. I offered my social security card, so why are you stopping me?’”

In the end, when he was released, Ali said he was given neither an explanation for why he was stopped, nor an apology.

Khalilah said they had had no problems coming from Jamaica.

Muhammad, who was born in Philadelphia, said he had never been questioned or stopped before. Nor does he have a criminal record.

“I was wondering why he was asking about my religion,” he said. “I thought, what does that matter?”

In a statement, Customs and Border Protection told CBS News that, while it’s against their privacy policy to comment specifically about the Ali’s case, “CBP does not discriminate based on religion, race, ethnicity, or sexual orientation.”

Anthony Mason asked, “What’s your response to that?”

“Then why would you ask me?” Ali replied. “I wouldn’t ask you, ‘What religion are you? Christian?’ Like there’s a problem with it? I know Islam and Christianity is peace.”

When asked about how he feels from his experience, Muhammad said, “I don’t know. That situation made me feel like I was at my father’s funeral -- I didn’t know what to think.”

Gayle King asked, “Did they know you were Muhammad Ali’s son?”

“Did they believe you?”

An Ali family lawyer has suggested that his detention was related to President Donald Trump’s recent executive order banning travelers from seven Muslim-majority countries and refugees from all countries. The travel ban has been blocked by a federal court. But Ali suggested that, while the travel ban was not in effect, it may be connected to his experience.

“There’s always a problem in history; it’s since gotten a lot worse,” he said. “Racial profiling -- not just racial profiling, but, you know, religious profiling.”

Khalilah said her wish was to present Mr. Trump with a Quran. Though she said she did not blame him, she wanted him to read the Islamic holy book. “The president should know we are a people of peace, and the Quran should be read to know that.”

She also hoped the Trump administration would “take Muslim and Islamic off the terrorism agenda. That’s what they should do.”