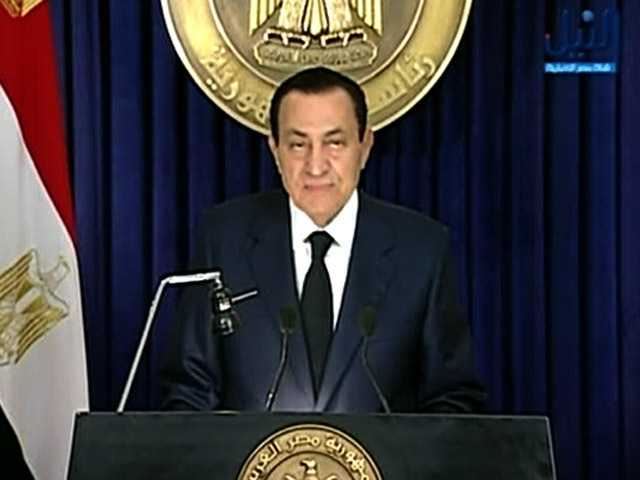 Following President Mubarak's pledge on Tuesday night to sit out the next election, go after corruption officials, reduce censorship and initiate democratic reforms, protesters were generally not satisfied by his concessions, and continued to call for the political leader of 30 years to step down immediately.

On Wednesday, Mubarak honored at least one of his pledges, bringing the Internet back to life in the country. But at the same time, pro-Mubarak supporters and provocateurs threatened foreign journalists covering the crisis in Egypt with violence, forcing them, some at gunpoint,  to take refuge in their hotels.

On one hand, the Mubarak government gives the people the technology to communicate around the world and organize protests. On the other hand, Mubarak allies deployed military forces, or agents roaming the streets, to shut down the free press--Al Jazeera, Al Arabiya, CNN, NBC, CBS, ABC, BBC and others trying to cover the intensifying story in Egypt.

CBS News' Lara Logan reported from Alexandria on the sudden government hostility to the press, with pro-Mubarak supporters and what appeared to be armed government security forces closely watching journalists and preventing them from filming and getting the story out. "For the first time in the last few days you can really feel what dictatorship means."

It's difficult to reconcile the Mubarak government turning on the Internet, which delivers information effortlessly and instantly across the planet, while dispatching openly hostile, threatening government agents to prevent journalists from reporting on events in Cairo and other cities.

The story Wednesday criss-crossing Egypt and the global Internet is how pro-Mubarak forces and thugs got violent with anti-government protesters, with more than 600 injured, and threatened journalists, forcing them off the streets to the relative safety of their hotel rooms.

That doesn't sound like the kind image that the tenuous Mubarak government wants to project with the rest of the world watching.

It's an example of how the Mubarak government has been disconnected from the modern world and trying to exert control over a situation that has awakened its people to the possibility of profound change and overflowed its digital borders. With the Internet switch in the on position, the Mubarak regime's efforts to put the genie back in the bottle, pacify protesters and delay substantial reforms and free elections, becomes transparent.

As U.S. State Department spokesperson and Twitter diplomat P.J. Crowley said, "The protesters will go home when they have confidence that the leaders are addressing their core demands--fundamental change and free and fair elections.

Threatening the international press and going after protesters are not the kind of fundamental changes that will allow the 82-year-old President Mubarak to fulfill his wish of dying in his own country.