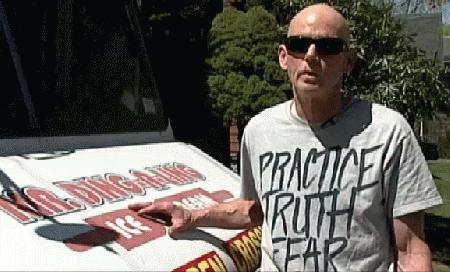 (CBS) GLOVERSVILLE, N.Y. - An ice cream truck driver known in his upstate New York community as "Mr. Ding-A-Ling" has been fired for an alleged DWI.

No, not for driving with ice cream.

The officer was not in good humor.

"[The sheriff deputy] saw the ice cream truck come into his lane and he immediately got off to the shoulder, turned around, and followed the truck until he got him stopped," Lorey told WRGB.

Hollister was reportedly cooperative and agreed to submit to field sobriety tests. According to the station, police say Hollister had a blood-alcohol content of .15.

Brian Collis, the owner of the Mr. Ding-A-Ling truck, confirmed Hollister was fired as a result of the incident.

Gloversville Mayor Dayton King reportedly says the Mr. Ding-A-Ling truck will keep its permit for the city as long as Hollister is not driving it.

This is not the first time that Hollister - aka Mr. Ding-A-Ling - has made headlines. In May, it was reported a chilly relationship had developed between him and another area ice cream truck operator, Sno Cone Joe.

Gloversville police told local media outlets at the time that Joshua Malatino and Amanda Scott, two Sno Cone Joe operators, faced harassment and stalking charges after heated confrontations with Hollister. According to WRGB, a lengthy court battle was waged between the ice cream vendors. The court ultimately ruled that Mr. Ding-A-Ling could keep his permit.

Hollister is due in court August 15 on the DWI charge.