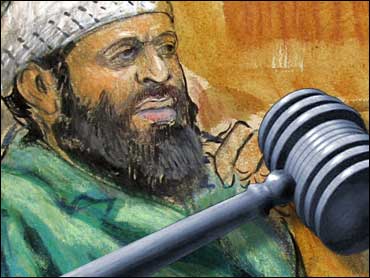 Zacarias Moussaoui's defense lawyers didn't want him to testify at the federal trial that will determine if he serves life in prison or gets the death penalty. But Moussaoui took the stand anyway, confirming nearly everything the prosecution says about him, and more.

After initially denying any direct role in the 9/11 attacks, Moussaoui testified Monday that he and would-be shoe bomber Richard Reid were supposed to hijack a fifth airplane on Sept. 11, 2001, and fly it into the White House. Moussaoui's testimony on his own behalf riveted the courtroom as he disclosed details he had never revealed before, essentially making the government's case for them, CBS News correspondent Jim Stewart reports.

The testimony was in stark contrast to Moussaoui's previous statements, in which he said the White House attack was to come later if the United States refused to release a radical Egyptian sheik imprisoned on earlier terrorist convictions.

On Dec. 22, 2001, Reid was subdued by passengers when he attempted to detonate a bomb in his shoe aboard American Airlines Flight 63 from Paris to Miami. The plane was diverted to Boston, where it landed safely.

Moussaoui told the court he knew the World Trade Center attack was coming and he lied to investigators when arrested in August 2001 because he wanted it to happen.

"You lied because you wanted to conceal that you were a member of al Qaeda?" prosecutor Rob Spencer asked.

Spencer: "You lied so the plan could go forward?"

The exchange could be key to the government's case that the attacks might have been averted if Moussaoui had been more cooperative following his arrest.

Moussaoui told the court he knew the attacks were to take place some time after August 2001 and bought a radio so he could hear them unfold. The news of the attacks was "glorious" he testified.

Specifically, he said he knew the World Trade Center was going to be attacked, but he asserted he was not involved in that part of the plot and didn't know the details.

And contrary to what his attorneys said in opening statements, Moussaoui admitted he did know at least 15 of the other 19 hijackers, including the top man Mohammed Atta, Stewart reports.

"I had knowledge that the Twin Towers would be hit," Moussaoui said. "I didn't know the details of this."

"Moussaoui's lawyers now have to really portray him as a crank, a kook, someone who would say anything and do anything to get what he wants - which is to be executed," CBS News legal analyst Andrew Cohen said.

Sally Regenhard, whose firefighter son Christian died at the World Trade Center, said "at least there would have been a chance" to head off the attacks if Moussaoui had told investigators in August 2001 what she heard him admit in court Monday.

"I was convinced that this man was only a heartbeat away from taking the controls of a plane," she said.

Asked by his lawyer why he signed his guilty plea in April as "the 20th hijacker," Moussaoui replied: "Because everybody used to refer to me as the 20th hijacker and it was a bit of fun."

Before Moussaoui took the stand, his lawyers made a last attempt to stop him from testifying. Defense attorney Gerald Zerkin argued that his client would not be a competent witness because he has contempt for the court, only recognizes Islamic law and therefore "the affirmation he undertakes would be meaningless."

Moussaoui denied he was to have been a fifth hijacker on United Airlines Flight 93, which four al Qaeda hijackers flew into a Pennsylvania field on Sept. 11 — the so-called missing 20th hijacker. But he quickly added that he was part of the 9/11 operation, ordered to pilot a fifth jetliner into the White House. He said Reid was the only person he knew for sure would have been on that mission, but others were discussed.

Reid pleaded guilty in October 2002 to trying to blow up Flight 63 and was sentenced to life in prison.

Moussaoui testified that at one point he was excluded from pre-hijacking operations because he had gotten in trouble with his al Qaeda superiors on a 2000 trip to Malaysia. He said it was only after he was called back to Afghanistan and talked with Osama bin Laden that he was approved again for the operation.

The 19 terrorists on Sept. 11 hijacked and crashed four airliners, killing nearly 3,000 people in the World Trade Center, the Pentagon and on the planes. The intended target of the plane that crashed into a Pennsylvania field remains unknown.

Moussaoui testified for nearly three hours, ending his time on the stand by declaring his gratitude that he was an al Qaeda member. When Spencer asked him if he was also grateful to have been the fifth pilot, the defendant merely said: "I'm grateful."

Moussaoui's lawyer asked him whether he thought anything in his testimony or court proceedings would affect his fate. He replied: "I believe in destiny. God gives life and death. I just have to speak the truth and God will take care of the rest."

Before Moussaoui took the stand, the court heard testimony that two months before the attacks a CIA deputy chief waited in vain for permission to tell the FBI about a "very high interest" al Qaeda operative who became one of the hijackers.

The official, a senior figure in the CIA's Laden unit, said he sought authorization on July 13, 2001, to send information to the FBI but got no response for 10 days, then asked again.

As it turned out, the information on Khalid al-Mihdhar did not reach the FBI until late August. At the time, CIA officers needed permission from a special unit before passing certain intelligence on to the FBI.

The official was identified only as John. His written testimony was read into the record.

"John's" testimony was part of the defense's case that federal authorities missed multiple opportunities to catch hijackers and perhaps thwart the 9/11 plot.

His testimony included an e-mail sent by FBI supervisor Michael Maltbie discussing Moussaoui but playing down his terrorist connections. Maltbie's e-mail said "there's no indication that (Moussaoui) had plans for any nefarious activity."

He sent that e-mail to the CIA even after receiving a lengthy memo from the FBI agent who arrested Moussaoui and suspected him of being a terrorist with plans to hijack aircraft.

Moussaoui said he kept telling the FBI and INS agents who arrested him that he was desperate to get back to his flight simulator training, CBS News' Stephanie Lambidakis reports. The statement was key to the government's case that the attacks might have been averted if Moussaoui had been more cooperative following his arrest.

Under cross-examination from lead prosecutor Robert Spencer, Moussaoui admitted in "a chilling, but matter-of-fact way" that he knew the attacks were coming some time after August 2001, Lambidakis reports — and bought a radio while in jail in Minnesota so he could hear them unfold. At first, he only heard about a "fire," but after watching the news coverage on a television, Moussaoui saw the towers engulfed in flames.

Prosecutors argue that Moussaoui, a French citizen, thwarted a prime opportunity to track down the 9/11 hijackers and possibly unravel the plot when he was arrested and lied. Moussaoui did not return to the stand following an afternoon break, Lambidakis reports.

Had Moussaoui confessed, the FBI could have pursued leads that would have led them to most of the hijackers, government witnesses have testified.

To win the death penalty, prosecutors must first prove that Moussaoui's actions — specifically, his lies — were directly responsible for at least one death on Sept. 11.

If they fail, Moussaoui would get life in prison.