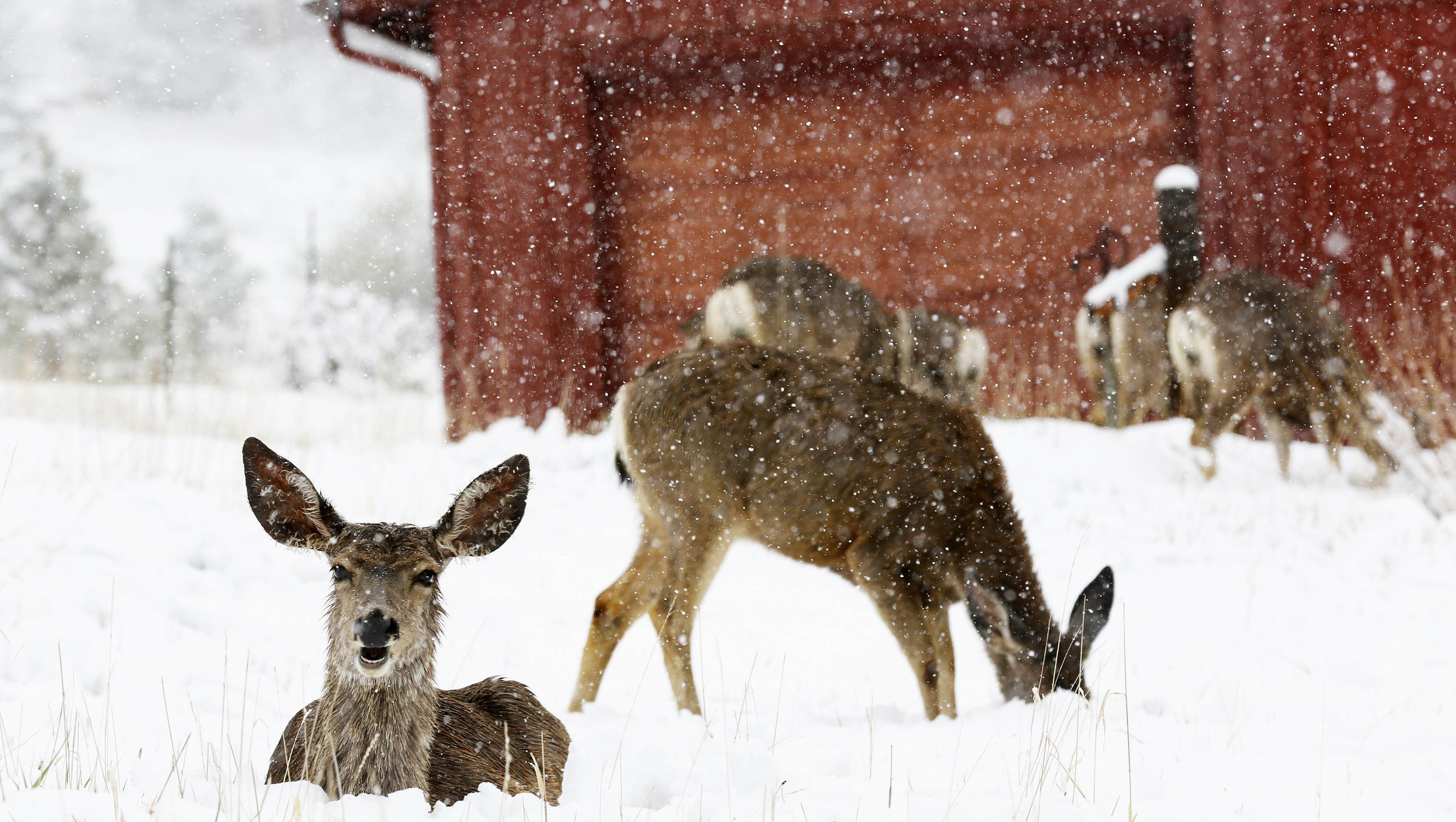 DENVER - A powerful spring storm dropped more than a foot of sloppy, wet snow in parts of Colorado and Wyoming on Mother's Day, and forecasters warned that instability ahead of the cold front created conditions ripe for tornadoes and severe thunderstorms in the Plains states.

The National Weather Service issued a winter storm warning for most of northern Colorado and parts of southern Wyoming for all of Sunday and for Monday morning. Strong thunderstorms and tornadoes developed in Nebraska and were threatening to push south on Sunday. The storm also created high winds across the West.

Kyle Fredin, a meteorologist for the weather service in Boulder, said the weather pattern is typical for this time of year, and "it's going to be kind of the same thing pretty much through the end of June."

Several tornadoes were reported in southeastern Nebraska, the weather service said, blowing down outbuildings and damaging power poles and irrigation systems. Large hail and strong winds seen in the state were expected to head south into Kansas, and a tornado watch was issued for parts of Oklahoma.

The storms maintained their strength and continued to generate tornadoes for more than three hours as they moved across Nebraska.

They knocked down several farm outbuildings west of Sutton and blew debris across U.S. Highway 6, forcing officials to close the highway. The town's business district was also damaged.

Hastings College track coach Ryan Mahoney said he saw the tornado that damaged buildings in Sutton as he was driving west on Interstate 80.

"Just about every tree in downtown is either knocked down or significantly damaged," Mahoney told the Lincoln Journal Star. "The streets were cluttered with debris. It looked like there was only one major building damaged."


The storm system was expected to weaken as it heads northeast from the Plains, possibly bringing rain as it moves into the Great Lakes, the weather service said.

"May snow certainly isn't unheard of here in Colorado, even down in the Denver metro area," said David Barjenbruch, another weather service meteorologist in Boulder. "If we see the total accumulations that we are anticipating from this storm, we are certainly going to see a top 10 May snow event for the Denver metro area."

Department of Transportation officials said plunging temperatures and heavy, wet snow created icy road conditions, and multiple accidents were reported on two interstates, frustrating skiers and snowboarders in the mountain areas eager to get a few more runs in before the season ends.

Barjenbruch said a foot of snow had already fallen in the foothills of Larimer County northwest of Denver by Sunday morning, and workers along much of the Front Range can expect a "slushy, sloppy morning commute" Monday.

The weather service also warned that snow could be heavy and wet enough to snap tree limbs and power lines, causing power failures. Winds gusting up to 30 mph could reduce visibility, and slushy roads could be treacherous to drive.

"At this point we are seeing some delays with our airlines while they are getting their deicing operations up and running, and we do expect the airlines to be fully deicing in the morning," she said.

Meanwhile, Denver officials plan to deploy up to 70 snowplows overnight to prepare for Monday's commute.

In southern Wyoming, the storm forced transportation officials to close a 150-mile stretch of Interstate 80 from Cheyenne to Rawlins on Sunday.

The weather service said mountainous areas in south-central Wyoming got up to 2 feet of snow, and the metro areas of Cheyenne and Laramie averaged 6 to 10 inches. Rob Cox, a weather service meteorologist in Cheyenne, said he expects more accumulation overnight, likely an additional 2 to 4 inches in some locations.

"There will be a lot of water after all this is said and done," he said, adding that there could be some localized flooding.

In the West, high winds at the bottom of the storm sent dust blowing across Arizona and New Mexico, and the Los Angeles and Las Vegas areas were under "red flag" fire warnings, with authorities saying blazes could quickly spread out of control under low humidity, gusty winds and dry conditions.

The storm is the result of a low-pressure system moving east colliding with a cold air mass from the north. Spring-like weather was expected to return to the Rockies by Tuesday.