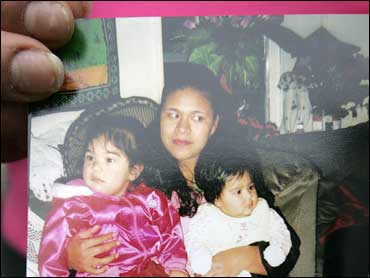 A young mother who may have been depressed apparently hanged three of her small daughters and herself in a closet using pieces of clothing and sashes, authorities said Tuesday.

A fourth child, an 8-month-old daughter, was also found dangling in the closet but was rescued by her aunt from the family's mobile home.

"It's horrendous. That's all I can say," Parker County Sheriff Larry Fowler said.

The woman was identified as Gilberta Estrada, 25. The infant, Evelyn Frayre, was in good condition at a hospital, Fowler said. Authorities did not immediately identify the other children, but Fowler said they were apparently ages 5, 3 and 2.

Filly Echeverria, who said she was the children's godmother, identified the dead as Maria Teresa Estrada, Janet Frayre and Magaly Frayre.

Estrada's sister discovered the baby was still alive when she made a noise, authorities said. She called 911 and said through sobs that the infant was dying. She and her daughter called back two more times to ask the ambulance to hurry, according to a tape of the calls.

The sheriff said the hangings appeared to be murder-suicide because the trailer's doors were locked from the inside and a relative said the woman had been depressed.

The young mother and her girls were last seen alive Monday evening, he said.

The sheriff said Estrada had won a temporary restraining order in August against Gregorio Frayre Rodriguez, who was believed to be the father of the infant and some of the other children, after an attack on Estrada.

The sheriff said the couple had stopped living together in February. Tuesday was the first emergency police call to Estrada's trailer, and authorities said there was no evidence that Frayre abused the girls.

A telephone listing for Frayre, 38, could not immediately be located.

"I just got a big kick out of watching the kids play over there on her porch, and today it's sad, very sad," neighbor Joyce Harris said as other trailer park residents milled about on their porches, some crying and talking softly about the deaths.

Estrada's trailer was dilapidated, with paint peeling off the brown and white mobile home. Cactus plants and a rose bush decorated the front. Toys and a bicycle littered the back yard.

Texas has seen a number of child killings by mothers in recent years.

Less than five years earlier, another Hudson Oaks family was torn apart when Dee Etta Perez, 39, shot her three children, ages 4, 9 and 10, before killing herself.

Andrea Yates drowned her five children in the family's Houston bathtub in 2001. In 2003, Deanna Laney beat her two young sons to death with stones in East Texas, and Lisa Ann Diaz drowned her daughters in a Plano bathtub. Dena Schlosser fatally severed her 10-month-old daughter's arms with a kitchen knife in 2004.

All four of those women were found innocent by reason of insanity. Yates initially was convicted of capital murder, but that verdict was overturned on appeal.