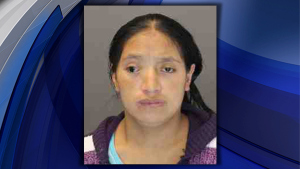 SPRING VALLEY, N.Y. – Police say they have arrested and charged the mother of a newborn who was found on Nov. 12 in a garbage bag at a Westchester County recycling center, according to CBS New York.

The Westchester Journal News reports Maria Oliva Guaman-Guaman, 23, was charged with second-degree murder and is being held without bail. She is accused of smothering the boy, then disposing of his body in a recycling bin outside a convenience store.

Police tracked the newborn’s body back to the suburb of Spring Valley using a lottery ticket found in the garbage bag, along with a skirt.

A medical examiner determined the full-term baby boy was born alive and was the victim of a homicide.

Spring Valley police named the newborn “Baby Angel” and held a funeral for him at St. Joseph’s Church on Nov. 23.

Last week police interviewed a woman seen in a video walking in and out of the church during the baby’s funeral. She was considered a “person of interest” in the case but was later cleared after she voluntarily talked to investigators and said she went to the church for bible study but left after realizing a Mass was under way.