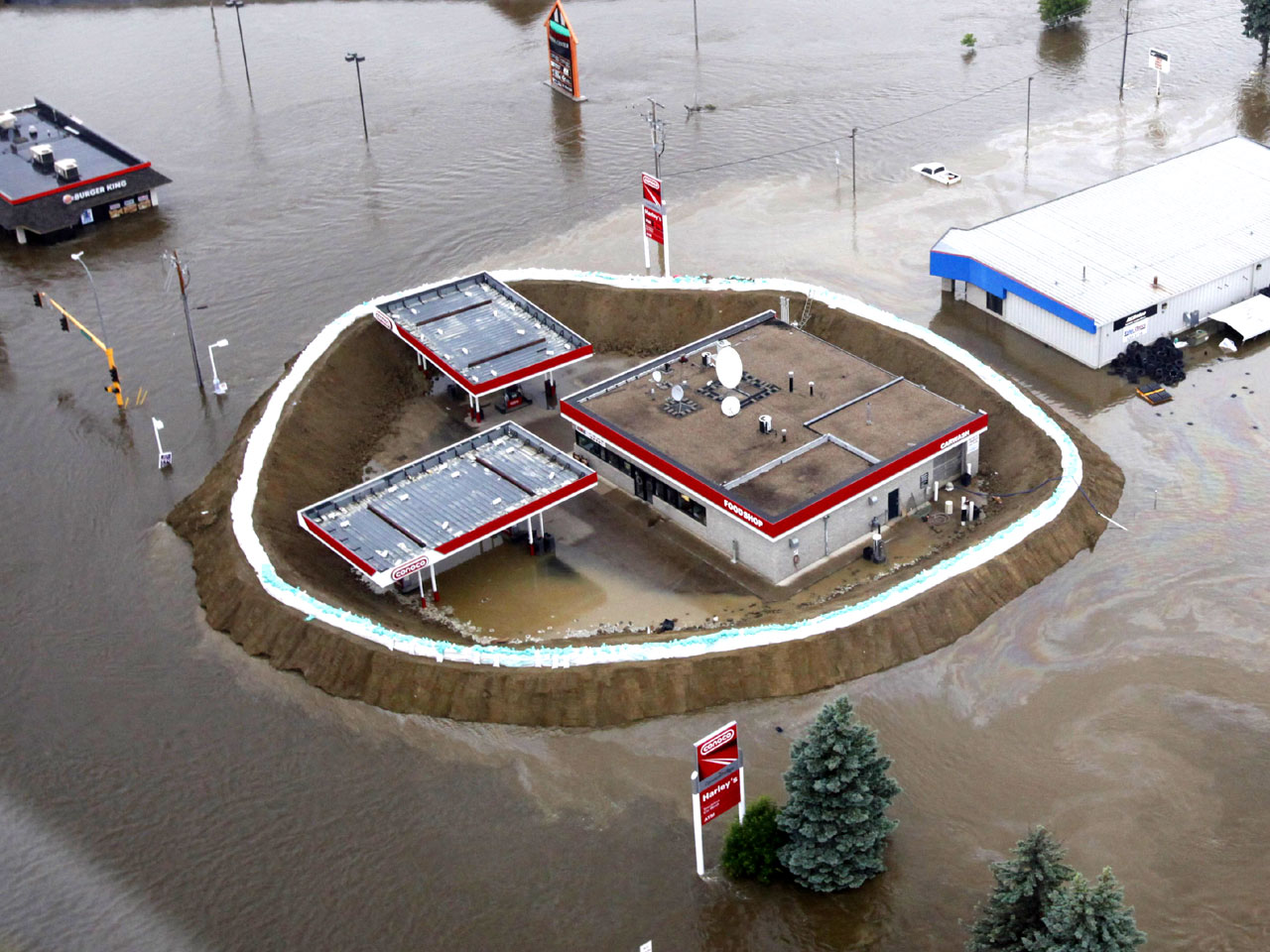 MINOT, N.D. — The Souris River began a long, slow retreat in Minot on Sunday, leaving behind an arduous rebuilding job for more than 4,000 homeowners and hundreds of business operators, most of whom lack insurance to pay for it.

Because they don't have coverage, federal assistance could amount to as little as a few thousand dollars apiece. Loan and grant programs will provide some help, as will an emergency relief fund just being set up.

Still, there was at least one ray of hope: State lawmakers might be able to lend a hand, thanks in large part to North Dakota's oil boom, which generates $1 billion a year in tax money and has helped shield the state from the worst of the recession.

Flooding N.D. river appears to be leveling off
One small bridge may be key to saving Minot, N.D.
Photos: Flooding in Minot, N.D.

Mike and Jodi Picard checked with neighbors when moving into their house less than two years ago and found that just one had flood insurance. The river was a quarter-mile away, and the prevailing opinion was that "we were not in a floodplain anymore" after a 1969 flood led to construction of levees and straightening of the river channel.

"Now you really kick yourself for not having it," said Jodi Picard.

The Souris topped out Sunday nearly 2 feet below projections heading into the weekend, and it appeared damage might not extend beyond the homes and businesses that took on water Friday. Officials warned against overconfidence until the river fell enough to take the pressure off levees. The National Weather Service projected the river would decline 2 feet by midweek.

The Picards stood on a bridge overlooking the swollen river, straining for a glimpse of their house in a distant cul-de-sac. It appeared water was knee-deep on the main floor.

The couple was staying with relatives in the area but said they were determined to return home. After the water recedes, they'll pump the basement dry, tear out drywall and insulation and make needed repairs.

State lawmakers will probably consider offering flood relief during a special session this fall. They have $386 million in a rainy-day fund, as well as another $136 million in a school-aid fund that could be diverted to the many communities touched by floodwaters this year. Both funds are fattened by state oil revenues.

"I think we're going to look at Bismarck, Minot, the whole statewide flooding issue, and look at them all together," said Senate Majority Leader Bob Stenehjem, a Republican from Bismarck.

When it comes to paying for rebuilding, FEMA has approved individual assistance for Burleigh (home to the capital of Bismarck) and Ward counties, where Minot is located. Gov. Jack Dalrymple is pushing to expand it to 20 other counties and the Turtle Mountain Chippewa and Spirit Lake Sioux reservations.

"We know that we have a tremendous recovery effort coming, and even as we talk about how to beat this water back over the next few days, we have already started talking about how the recovery will be managed and organized," the governor said.

The FEMA assistance is capped at a little more than $30,000, but Sen. Kent Conrad, a North Dakota Democrat, said a more realistic figure is $7,000 to $8,000 — the typical amounts provided to victims of severe flooding in Nashville, Tenn., a year ago.

FEMA and the federal Small Business Administration will offer loan and grant programs, too. The Bank of North Dakota, the nation's only state-owned bank, already offers low-interest loans up to $500,000 to business people, farmers and ranchers living in areas that the president has declared a disaster area.

The bank and the state's Public Finance Authority also have made low-interest loans available to local governments while they wait to collect expected federal aid after they make repairs on their public works.

Eric Hardmeyer, the Bank of North Dakota's president, said the bank learned valuable lessons about administering disaster aid from the epic Red River Valley floods of 1997, which swamped the city of Grand Forks, knocked out its sewer and water systems and forced the evacuation of more than 50,000 people.

"We found that we needed to let the federal programs get in and do their business before we found out where we should play," Hardmeyer said. "Their pockets are deeper, and they're more experienced at that than we are."

Pat Owens, who was mayor of Grand Forks when the flood hit in April 1997, said federal agencies were critical to the city's recovery. They set up a one-stop shop for aid programs in Grand Forks' Civic Auditorium.

"That was a salvation," Owens told The Associated Press in a telephone interview Sunday. "People would not know how to even begin trying to bring their lives back, and that gave them a place to go."

Les Younger, a retired Air Force veteran who maintained aircraft weapons systems at Minot Air Force Base, and his wife, Jacque, a seamstress, said they did not buy flood insurance because they thought their home was far enough from the river.

Jacque Younger said the couple's recovery "is going to be very tough, because we don't have a lot of savings." But they tried to put the best face on it by thinking of how they might change things in rebuilding.

"You have to look on the bright side, because if you look on the dull side, it gets you down," Jacque Younger said.