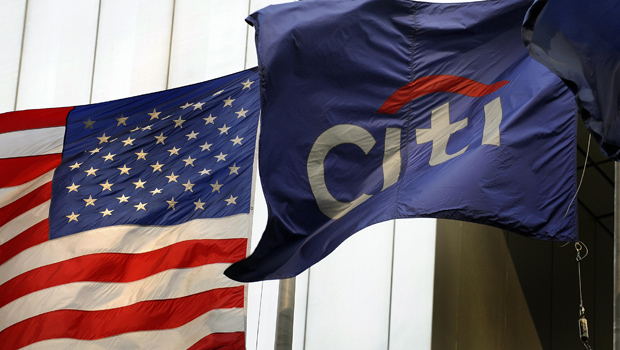 NEW YORK Citigroup (C) isn't as enthusiastic as its peers about a comeback in the housing market.

On Friday, executives at Wells Fargo (WFC) and JPMorgan Chase (JPM) declared that the long-struggling market had turned a corner. On Monday, Citigroup's top number-cruncher said he wasn't so sure.

In a conference call with reporters after the bank released its quarterly earnings, chief financial officer John Gerspach cautioned that recent history is littered with upturns in the housing market that proved short-lived.

He said that despite a few signs of stabilization in the housing market, there are "still some rather significant challenges to be faced." He warned against predictions with the uncertain presidential election and federal budget still casting a shadow.

"I don't use phrases like 'turn the corner,'" Gerspach said, referring to statements Friday from JPMorgan CEO Jamie Dimon and Wells Fargo finance chief Tim Sloan. "I have difficulty seeing corners sometimes, so I'm not sure what corner we may have turned."

"There's still a question in my mind about whether we've got a strong enough economy to continue sustaining the housing market," he added.

Citigroup reported earnings that beat analysts' expectations, after stripping out one-time items like a big write-down it had to take because it got less money than it had hoped when it negotiated to sell its stake in its retail brokerage.

Investors were pleased with the results and sent the stock up 4 percent in morning trading, rising $1.50 to $36.25.

Citigroup said that revenue was helped by mortgage refinancing, although mortgage originations in North America fell, dropping to $14.5 billion from $17 billion. The discrepancy is likely because low interest rates have made mortgage lending less profitable for banks.

Mortgages, and the securities they were bundled into, were a scourge during the financial crisis, felling storied financial institutions that made loans that were too risky or bet that securities made of subprime mortgages would keep rising.

The banks' mortgage units are still a magnet for lawsuits and regulatory charges. In August, Citigroup agreed to settle lawsuits from shareholders who said the bank didn't properly warn them of its exposure to risky subprime debt.

Citigroup also reported Monday that it had to set aside more money that it might have to pay investors who bought Citi's mortgages in the run-up to the financial crisis. The so-called "repurchase" demands from private investors are rising.

Overall, the bank trimmed about 2 percent of its jobs, dropping to 262,000 employees from 267,000. It spent less on advertising and marketing, but more on technology and communication.

Revenue in the investment bank's lending operations declined, while revenue from trading stocks and bonds rose.

Citigroup is still trying to patch its reputation after the financial crisis nearly brought it to collapse. After years of empire-building, the bank has been selling units and trying to become more efficient and more manageable.

CEO Vikram Pandit is still an ardent defender of the big-bank model, even though the former CEO, Sandy Weill, went on CNBC in July and said big banks should be broken up. It was a surprising change of heart for the dealmaker who built Citi into a behemoth.

Citi also has to figure out how to pay top executives without alienating its shareholders. Citi paid Pandit nearly $15 million for 2011, about half in option awards, but shareholders in the spring said they disagreed with the payout.

Gerspach declined to comment on how the bank might change executive pay next year, saying that was the board's purview.

Revenue, after the special charges, was $19.4 billion. That beat expectations of $18 billion.

The bank wrote down $4.7 billion after agreeing to sell its portion of retail brokerage Morgan Stanley Smith Barney for less than it had hoped. Including that and other one-time charges, net income was $455 million, and revenue was $14 billion.