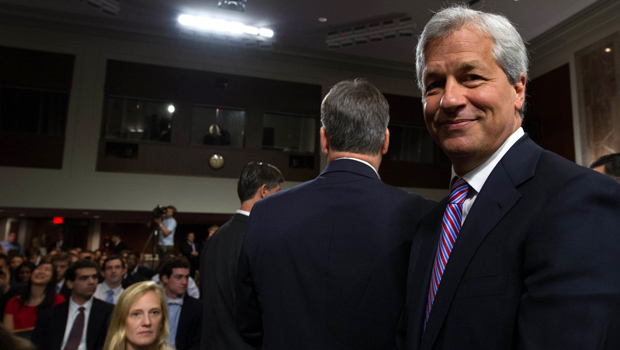 NEW YORK Jamie Dimon, the CEO of JPMorgan Chase (JPM), is known as much for his swagger as for his banking savvy. Friday, when his bank reported triumphant results for the third quarter, was no exception.

Speaking to reporters and later to analysts, he acknowledged being irritated by a report that his finance chief might switch jobs and quickly turned away a question about bonuses for himself and his employees.

When UBS analyst Brennan Hawken asked whether the bank would approach its conversations with the Federal Reserve differently after the surprise trading loss it revealed in the second quarter, Dimon's answer was quick.

"Look, it's obvious that we had a gap in the armor here. Like I said, an arrow went right through that gap," the CEO said. "But other than that gap, we think we have pretty damn good controls."

Dimon, 56, has long been known as an outspoken leader. As public and government scrutiny of the banking industry has increased, some CEOs have tried to stay under the radar. But Dimon has been unafraid to criticize the government for new regulations that he sees as overwrought.

He has reason to be confident: JPMorgan Chase had a blockbuster third quarter, raking in a record $5.3 billion profit that far exceeded the expectations of Wall Street analysts.

The bank increased revenue, with a surge in mortgage refinancing, investment banking fees and credit card use. It also trimmed expenses and set aside less money for potential problem loans, a sign that the bank's lending portfolio is healthier.

He was less enthusiastic when Hawken, the UBS analyst, asked about a report in The Wall Street Journal that Doug Braunstein might step down as chief financial officer.

"Obviously," he said, "I find it hugely irritating that people yapped to the press like that."

On a separate conference call with reporters, Dimon chastised one as "really impolite" for asking a question that Dimon said executives had already answered three times.

Dimon declined to answer another reporter's question about what the board of directors might decide about his own pay this year. Some had speculated it would be cut because of the trading scandal.

"I would never tell you what our board of directors does, OK?" Dimon said.

He was paid $23 million last year, mostly in stock and option awards.

Dimon has long been considered a paragon of banking leadership. After the 2008 financial crisis, which crippled or destroyed some of Dimon's rivals, his bank became the biggest in the United States by assets. Again Friday, he praised JPMorgan's "fortress balance sheet."

While other top executives were sent packing, Dimon's hold on his job has been firm. He is approaching his seventh anniversary as CEO.

Though the trading loss ballooned to $6 billion and earned Dimon two invitations to testify before Congress, it didn't seem to shake investors' confidence. JPMorgan's stock price was above $41 on Friday, roughly where it was before the loss was revealed. JPMorgan was the most profitable mega-bank in the second quarter, and likely will be again for the third quarter.

Dimon still has thorny problems to deal with. Like other banks, JPMorgan can't shake the consequences of the financial crisis, with lawsuits still popping up. In the third quarter, JPMorgan added $684 million to its legal reserves, more than double the $335 million it added in the second quarter.

As for Braunstein, the CFO, Dimon praised him as a "top professional." When the operator asked Dimon whether he had closing comments, Dimon replied: "I'm just surprised no one mentioned how handsome Doug Braunstein looked in the article in The Wall Street Journal."

Braunstein replied: "On that final note, thank you all very much."