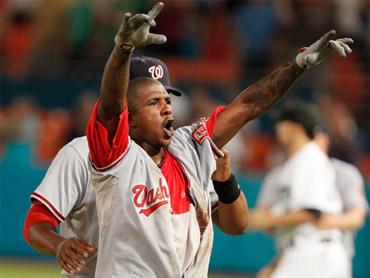 Nyjer Morgan's wild week has landed him an eight-game suspension, one of nine punishments handed out Friday by Major League Baseball following a brawl between Washington Nationals and Florida Marlins.

MLB suspended Nationals outfielder Morgan and fined him an undisclosed amount for three separate incidents over the past week. The penalty is in addition to a seven-game suspension he received Aug. 25 that is currently under appeal.

Six players, both managers and a coach were cited after a review of Wednesday night's odd and ugly game in Miami, won 16-10 by the Marlins. Florida pitcher Chris Volstad was suspended for six games, pitcher Alex Sanabia for five, first baseman Gaby Sanchez for three, and manager Edwin Rodriguez for one. Volstad and Rodriguez also were fined, as was pitcher Jose Veras.

For the Nationals, pitcher Doug Slaten and third base coach Pat Listach were suspended for three games, and manager Jim Riggleman for two games. Riggleman and Listach also were fined.

But the focus is overwhelmingly on Morgan.

His current spate of notoriety began Aug. 21, when he threw a ball at a fan in the stands in Philadelphia. The appeal of his seven-game suspension for that misdeed is scheduled to be heard Tuesday.

Then, last Saturday, Morgan ran over St. Louis Cardinals catcher Bryan Anderson in the bottom of the eighth inning at Nationals Park, even though Anderson didn't have the ball. Morgan neglected to touch home plate in the process and was called out. Riggleman benched Morgan the next day for what the manager called "unprofessional" play, and Morgan publicly disagreed with Riggleman's decision.

On Tuesday, Morgan ran over another catcher, this time Florida's Brett Hayes, while attempting to score from second on a ground ball in the 10th inning. Hayes held onto the ball to tag Morgan out, but the catcher separated his left shoulder on the play.

The Nationals were expecting retaliation on Wednesday, and it came. Volstad hit Morgan with a pitch in the fourth inning, but Morgan promptly answered by stealing second and third, even though the Nationals were trailing 14-3.

Volstad then threw his first pitch of the sixth behind Morgan, setting off a fight. Morgan charged the mound took a swing at Volstad, but Sanchez quickly arrived on the scene and clothes-lined Morgan, knocking off Morgan's batting helmet and sending him to the ground. Morgan, Volstad, Rodriguez and Veras were ejected. Morgan was loudly booed when he raised his arms to egg on the crowd as he was escorted off the field.

Later in the game, Slaten and Riggleman were ejected after Sanchez was hit with a pitch with two outs in the seventh.

After the game, Riggleman backed Morgan, saying it was OK for the Marlins to throw at the outfielder once but not twice. Riggleman also had no problem with Morgan stealing the two bases.

Volstad's suspension is for intentionally throwing at Morgan twice and for fighting during the brawl. Sanabia, Sanchez, Veras and Rodriguez were punished for their parts in the melee.

Slaten's suspension is for hitting Sanchez after a warning had been issued to both benches. Riggleman was cited for his part in the brawl and for Slaten's beaning of Sanchez. Riggleman was also given an additional fine by Frank Robinson, senior vice president of major league operations, for "inappropriate comments regarding the incident."

Listach was suspended for his part in the brawl.