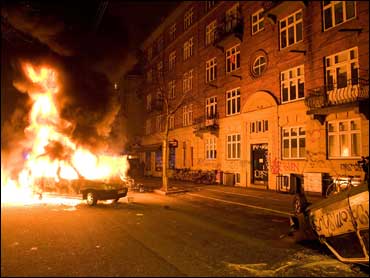 Some 3,000 people demonstrated Saturday in Copenhagen against the closure of a disputed youth center as police braced themselves for more violence following two nights of riots that turned parts of the Danish capital into a battlefield.

More than 500 people were arrested, including scores of foreigners, since the riots started Thursday after an anti-terror squad evicted squatters from the so-called "Youth House" in the Noerrebro district.

On Saturday afternoon, demonstrators marched peacefully toward the four-story building that for years has served as a popular cultural center for anarchists, punk rockers and left-wing groups.

Hundreds of police followed the procession from a distance and sealed off streets in the area around the disputed building.

"The idea of an alternative society is good," said Berit Larsen, 57, as she watched the demonstration pass by. "We need to have room for everyone, but the violence we have seen is not what I consider an alternative way for society."

In overnight clashes, a school was vandalized and several buildings were damaged by fire. One protester was reportedly wounded in the violence early Saturday, while 25 were injured in riots the night before. Police said the street violence was the worst in a decade.

"In the last 10 years we haven't had riots like we've seen in the past two days," police spokesman Flemming Steen Munch said.

Police searched more than 10 homes in Copenhagen in an effort to track down activists, he said.

Meanwhile, vandals covered Copenhagen's famed Little Mermaid statue with pink paint. Police could not say whether the vandalism was linked to the riots.

Police said foreign activists from Sweden, Norway and Germany joined hundreds of Danish youth, hurling cobblestones at riot police and setting cars on fire. In a sign the Danish youth expected foreign help, the Web page of "Ungdomshuset," or the Youth House, posted a warning in English that Danish police had increased border controls.

"This is a display of anger and rage after more than seven years of struggle to keep what is ours," 22-year-old activist Jan told the AP by telephone, adding that he had been coming to the building for 10 years. He declined to give his last name, saying that was the norm among the people frequenting the building.

"We want to continue with the activities we used to have, like concerts and stuff. If they gave us that, the conflict would have been over," he said.

The building, which has been viewed as free public housing by young squatters since the 1980s, has become a popular cultural center for youngsters with anti-establishment and far-left sympathies.

Authorities say it also has been a staging point for numerous left-wing demonstrations that turned violent in recent years.

Saturday's violence broke out after midnight when protesters gathered near the youth house in the Noerrebro district of Copenhagen. The demonstrators briefly clashed with police and erected barricades, which they set on fire along with four cars.

Hundreds of police officers in riot gear used tear gas to disperse the crowd, pushing away demonstrators and onlookers to make way for firefighters scrambling to put out blazes that sent smoke billowing into the night sky.

Across the city, other groups of protesters set fire to trash bins, while protesters ransacked a school and hurled chairs, desks and computers onto the street.

Danish newspaper Nyhedsavisen, a free daily, Saturday said one of its reporters had been suspended for allegedly participating in the riots while on assignment.

In an apology posted on the newspaper's Web site, Editor in Chief David Trads said the reporter "to some extent took part in the disturbances by throwing cobble stones," and called the behavior "totally unacceptable."

The clashes were Denmark's worst since May 18, 1993, when police fired into a crowd of rioters protesting the outcome of a European Union referendum. Ten of the protesters were wounded.

The eviction had been planned since last year, when courts ordered the squatters to hand the building over to a Christian congregation that bought it six years ago.

The squatters refused to leave, saying the city had no right to sell the building, which has hosted concerts with performers like Australian Nick Cave and Icelandic singer Bjork. They have demanded another building for free as a replacement.

Police said the protesters appeared to have been organized by left-wing extremists, but youth vandals with no clear political motive joined up.

Sympathy protests were held in Hamburg, northern Germany, and in Norway, Sweden and Finland.