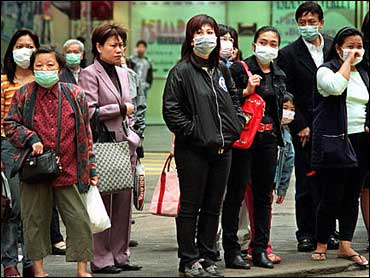 Three of the newly reported deaths were in Hong Kong, where authorities announced they will quarantine for up to 10 days anyone who lives with a patient confirmed to have severe acute respiratory syndrome.

Health Secretary Dr. Yeoh Eng-kiong said he was going "one step further to help contain the spread of the disease." Hong Kong, where 30 people have died, earlier quarantined 240 people from a hard-hit apartment building, but some were released late Wednesday.

Singapore's Health Ministry said Thursday that authorities are installing cameras in the homes of quarantined people because some have flouted orders to stay home. Those who violate quarantine will be given an electronic wrist tag which will alert officials if they leave home. There are 490 people quarantined in the city-state.

China said its death toll had risen by two to 55. The figure did not appear to include an American teacher who died after falling ill in the hard-hit southern province of Guangdong.

Also Thursday, the World Health Organization warned that many Beijing hospitals aren't making daily reports on SARS cases and authorities weren't systematically tracing people who had contact with those infected.

That could let the disease spread still further, said the report posted on the WHO Web site and prepared by investigators who visited Beijing and Guangdong. The team cautioned that poorer regions of China may lack the resources to cope with the disease.

Authorities believe it is spreading via air travel, and health workers at airports throughout Asia are checking arriving passengers for symptoms of fever, aches, dry cough and shortness of breath.

Malaysia started denying visas to most people from Hong Kong. Taiwan said arriving airline passengers would be examined by medical staff and quarantined if found to have fevers.

Doctors have yet to confirm the cause of SARS or pin down details of how it spreads. They have no cure, but most patients recover with prompt medical attention.

Mainland China and Hong Kong have reported the highest numbers of infections and deaths. The disease also has killed people in Canada, Singapore, Vietnam, Thailand and Malaysia. China has been accused of trying to conceal information about the outbreak since the first cases were detected in November.

China's Health Ministry on Thursday raised the SARS death toll in Guangdong, which borders Hong Kong, by one to 44 without giving any details. A brief ministry statement also raised the toll for the northern province of Shanxi by one death to two.

The American teacher was pronounced dead Wednesday in Hong Kong after being moved there in what a friend contended was an attempt by Chinese authorities to avoid the embarrassment of another foreigner's death on the mainland. Hong Kong, although part of China, reports its deaths from SARS separately.

A provincial health official in Guangdong on Thursday disputed that contention.

"We wanted to keep him in Shenzhen, but at the request of his family, we moved him to Hong Kong, where he died," Zhong Nanshan, an epidemiologist at the Guangzhou Institute of Respiratory Diseases in Guangdong's capital, told reporters in Beijing.

A senior Chinese surgeon accused the government Wednesday of concealing details of the spread of SARS in Beijing, saying there were more deaths and many more cases than reported.

Asked about that Thursday at a news conference, Vice Health Minister Ma Xiaowei suggested hospital workers might have been mistaken about the number of cases, because patients who only are suspected of having SARS are being held in hospital isolation wards. Ma said those patients would be released if found not to have the disease.

The Health Ministry statement Thursday said the number of deaths in Beijing was unchanged at four, while the number of cases in the Chinese capital has risen by three to 22.

Anxiety among foreigners in Beijing rose after a Finnish official of the International Labor Organization died Sunday. Health workers have been spraying disinfectant in government apartment compounds that house diplomats.

In Singapore, Manpower Minister Lee Boon Yang said that over the next month, at least 600 foreign workers arriving from SARS-stricken areas will be quarantined for 10 days.