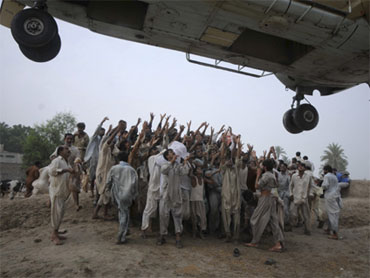 As the prime minister appealed for national solidarity, hardline Islamists rushed to fill in the gaps in the government's aid effort.

Pakistani officials estimate as many as 13 million people throughout the South Asian nation have been affected by the worst flooding in the country's 63-year history, though the United Nations, apparently using different metrics, has put the number at roughly 4 million. About 1,500 people have died, most of them in the northwest, the hardest-hit region.

The intense deluge that began about two weeks ago has washed away roads, bridges and many communications lines, hampering rescue efforts staged by aid organizations and the government. Incessant monsoon rains have grounded many helicopters trying to rescue people and ferry aid, including six choppers manned by U.S. troops on loan from Afghanistan.

Confidence in the national government's ability to cope has been shaken by the decision of President Asif Ali Zardari to visit France and England amid the crisis.
Photos: Pakistan Flooding
Ambassadors: Pakistan Flooding Could Impact Taliban Fight
Flash Floods Kill 103 in Indian-Held Kashmir

Floodwaters receded somewhat Friday in the northwest, but downpours in the evening and early Saturday again swelled rivers and streams. Pakistani meteorologist Farooq Dar said heavy rains in Afghanistan were expected to make things even worse into Sunday as the bloated Kabul River surged into Pakistan's northwest.

That will likely mean more woes for Punjab and Sindh provinces as well, as new river torrents flow east and south.

An Associated Press reporter saw many people walking on foot and using trucks to migrate to safer places in interior Sindh, where tens of thousands have fled for safer land and floodwaters have swallowed many villages. Some Pakistanis, however, refused to leave their crops and homes.

"Let the flood come. We will live and die here," said Dur Mohammed, 75, who lives in a mud brick home in Dadli village.

Mohammed was one of 250 people in Dadli resisting evacuation, even though floodwaters have already began touching the embankments of the Indus River less than one mile away. Many feared that if they left and the floods never came, their household items would be stolen.

Pakistan's military said Saturday it had rescued more than 100,000 people from flood-affected areas, while 568 army boats and 31 helicopters were being used for the rescue operation.

The army was also providing food and tents to the survivors, an army statement said.

Some 30,000 Pakistani soldiers are rebuilding bridges, delivering food and setting up relief camps in the northwest, which is the main battleground in the fight against al Qaeda and the Taliban. Foreign countries and the United Nations have donated millions of dollars to the aid effort.

NATO said in a statement Saturday that Pakistan had asked for help dealing with the flood. The alliance said it would help coordinate assistance offered by members and partner nations, including aid transport.

The U.S. has tapped soldiers from its war effort in Afghanistan to operate four Chinook and two Black Hawk helicopters to evacuate people from the northwest's Swat Valley and carry aid there. Around 85 U.S. soldiers are involved, though ongoing rain has limited their flights.

Also helping in the relief effort are Islamist charities, including the Falah-e-Insaniat Foundation, which Western officials believe is linked to Lashkar-e-Taiba. Lashkar is the militant group blamed for the deadly 2008 attacks in Mumbai, the financial capital of India, Pakistan's regional archrival.

The Falah-e-Insaniat Foundation says it is running 12 medical facilities, providing cooked food for 100,000 people every day, and plans to open shelters soon.

"The magnitude of this tragedy is so severe, and the area affected is so vast, that the government alone cannot meet the needs of such a large number of affectees," said Atique Chauhan, a spokesman for the foundation. "The U.S. efforts for rescue and relief are good, and we will appreciate help from all of humanity, whether it is the U.S. or even India."

Gilani appealed for national unity during the crisis.

"I request that all the political parties be united and work together to help the flood victims," he told reporters on Saturday, adding that the government is doing everything it can to move people to safer ground.

"The next two days are very critical in this regard," Gilani said. "Our top priority is to rescue people, to save their lives. But we will also provide them all facilities, and we will work for their rehabilitation."
By Associated Press Writers Ashraf Khan and Nahal Toosi; AP Writers Riaz Khan and Munir Ahmed contributed to this report