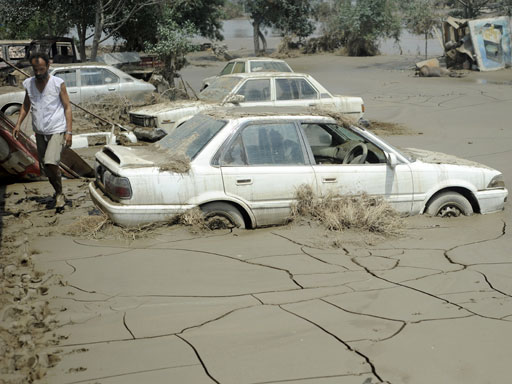 The widespread destruction across Pakistan from floods in the past week has jeopardized the country's ability to become a more robust partner for the U.S. campaign to defeat Taliban militants and al Qaeda in the Pak-Afghanistan region, two western ambassadors based in Islamabad warned on Friday in separate background interviews with CBS News.

As the flood spread to the country's southern parts after emanating from its north and gushing through its populous Punjab province before heading to the southern Sindh province, a government official cited preliminary estimates which put the likely cost of the damage to more than the material loss from a massive earthquake in 2005.

"The material cost now is looking like exceeding the cost of damage from the earthquake which some people thought could be $4 billion or more" said the official who spoke on condition that he not be named. "This entire situation, the damage from the floods, has put us back many years. There is so much destruction to roads, bridges and vital facilities."

On Friday too, officials from the Water and Power Development Authority, the state electricity provider, watched helplessly as flood water entered the Kot Addu power plant - one of Pakistan's largest electricity generating facilities, in southern Punjab, threatening to damage the facility.

"It is tragic to see this situation. We simply can't do anything," said the official who spoke to CBS News in Islamabad.

The two western ambassadors, who spoke to CBS News also on background as they were not authorized to speak publicly, warned that a failure in stepping up international and local relief effort, followed by a rapid move to begin reconstruction will risk prompting angry public protests on the streets.

"Historically in different parts of the world, we have seen angry protests trigger when people felt so neglected and came out on the streets to share their anger," said one western ambassador. "It is vital for everyone-in and outside Pakistan, to closely consider the political fallout from this very nasty situation and move swiftly to deal with it".

The second western ambassador went a step further, saying, "Left to face their miseries on their own, you have more than 3 million Pakistanis affected by the floods who will protest in unpredictable ways".

In the past week, a growing number of western countries including the U.S. have sent emergency supplies. The U.S. assistance includes 6 helicopters, deployed primarily to rescue people trapped in flood affected areas.

But the second western ambassador warned that more needs to be done.

"The amount of rescue supplies must be raised significantly before this situation becomes a catastrophe," he said. "It is already more than half a catastrophe".

The first western ambassador who spoke to CBS News said that growing instability in Pakistan following the flood related destruction creates the risk of weakening the government's resolve to launch new campaigns against militant groups.

"For months, the U.S. and other countries have been urging Pakistan in private to widen the scope of its campaign. We need Pakistan to become more focused and more aggressive. But now with this destruction, where will the focus come from?" he asked.

The destruction has also prompted widespread criticism of President Asif Ali Zardari over his decision to travel to France and the U.K. in the past week while the disaster widened at home. Additionally, Prime Minister Yusuf Raza Gilani has also been criticized for his failure to provide more robust leadership.

In one widely cited case, Gilani has been criticized following his visit to a makeshift medical relief camp in the Punjab. After his visit, Pakistan's news organizations reported that the camp was a fake - established before Gilani's trip and dismantled after he left.

"Our leaders are only looking for photo-ops. No one cares about the people" Saeed Tariq, an Islamabad school teacher said Friday.