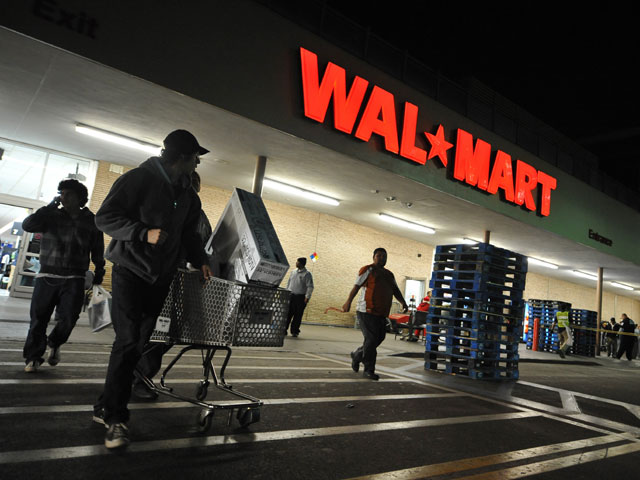 The group filed a lawsuit on Monday in the Chancery Court of Delaware on behalf of the company itself against the executives.

The goal in such cases, known as "derivative actions," is to change the way a company is run. As with other derivative actions, the plaintiffs plan to give Walmart any fines or other financial damages won through the lawsuit. The pension funds own 5.6 million shares of Walmart Stores Inc. (WMT).

This is the latest of at least a dozen such lawsuits filed against Walmart since the New York Times reported in late April that Walmart's Mexican unit allegedly paid millions of dollars in bribes to win favors. The Times said executives didn't notify authorities even after Wal-Mart found evidence of the scheme.

"Rooting out the directors and executives responsible for the current crisis would be a first step, but Wal-Mart also needs corporate governance reforms and an independent board that will protect outside shareholders and safeguard against another breakdown of internal controls," said Jon Liu, New York City Comptroller in a statement.

"We take our responsibility to our shareholders very seriously," Tovar said. "We will review the lawsuit closely and are thoroughly investigating the issues that have been raised."

The lawsuit names 27 current and former Walmart executives including all its current board members, except one. The board roster includes CEO Mike Duke, former CEO Lee Scott and descendants of the company's founder, Jim Walton and board Chairman Robson Walton. The exception is Marissa Mayer, vice president for local, maps and location services at Google Inc., who was elected to the board for the first time this month.

The suit also names Eduardo Castro-Wright, who is retiring this month as vice chairman but is not on the company's board. Castro-Wright led Walmart's Mexico division at the time of the alleged bribery and when the probe began in 2005.

In early May, the New York City Pension Funds urged shareholders to vote at the company's annual meeting on June 1 against the re-electing Duke and four other board members because of the bribery allegations in Mexico.

All members kept their seats. But Monday's lawsuit by the New York City Pension Funds comes a week after a final shareholder tally showed discontent rising against key executives and board members, including Duke, over the bribery allegations.

All of the company's nominees were re-elected. But the rise in votes against key leaders underscores how the bribery case could distract the world's largest retailer as it tries to continue its sales momentum in the U.S. and overseas

Tovar reiterated on Monday that Walmart is committed to a "full and independent investigation."

"A thorough investigation will take time and we are in the early stages. It would be inappropriate for us or others to come to conclusions before the investigation is complete," Tovar said.