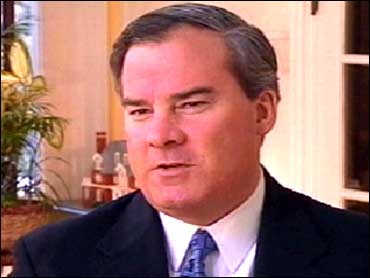 The Connecticut Supreme Court ruled Friday that Gov. John G. Rowland must testify before a committee considering his impeachment, making him the first sitting chief executive in U.S. history ordered to appear before a legislative body.

In a 5-2 ruling, the court upheld an earlier decision by a lower court judge. The governor had argued that the Legislature was intruding on the separation of powers among branches of government in demanding that he testify.

But the majority justices said the "subpoena is not inconsistent with the separation of powers provision of the state Constitution."

Chief Justice William Sullivan and Justice Peter Zarella said it was unnecessary for the court to intervene.

"The courts should not reach out and decide difficult constitutional questions involving the balance of powers between the legislature and the chief executive in the absence of an immediate and compelling need to do so," they wrote.

Rowland is under investigation for accepting gifts from friends, state contractors and employees. He is also the subject of a parallel federal corruption investigation. The three-term Republican has said he provided nothing in return for the gifts and has not compromised his office.

Members of the House Select Committee of Inquiry have said they want to hear from the governor personally or at least from his attorneys and other witnesses.

"I am hoping the governor will choose to cooperate with the committee," said Rep. Arthur O'Neill, a co-chairman of the committee, said after the ruling.