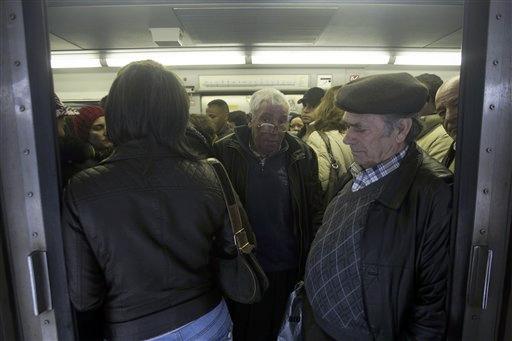 ff LISBON, Portugal (AP) - Political and economic danger signs flashing in Portugal and Ireland threaten to punch a hole in the European Union's attempts to contain a financial crisis that has gripped the continent for more than a year.

Europe has already provided billions in bailouts to keep the Irish and Greek governments from going bankrupt. With Portugal now teetering on the edge of financial catastrophe, and Ireland's upcoming election unsettling financial markets, an ominous new phase in the biggest emergency in the 17-nation euro's history could be opening up, menacing the livelihoods of millions of Europeans.

With Portugal apparently unable to rid itself of punishingly high borrowing costs demanded by spooked investors, chances are growing that the debt-laden country will become the next to need a bailout from the eurozone's rescue fund. On top of that, a top official says the country could face a double-dip recession, with unemployment already at record levels.

In Dublin, the election later this month raises the prospect of opposition parties shifting the burden of paying bad bank debts from taxpayers - that is, voters - onto investors, many of them foreign, who hold the banks' bonds. Such a move could not only unravel last year's Irish bailout deal but, perhaps more dangerously, undermine banks in the UK, France and Germany which lent heavily in Ireland and constrict bank lending in general.

Any new flare-up could spread to vulnerable - and bigger - eurozone countries such as Spain, Belgium and Italy, as bond investors fear countries may not pay their debts. That drives up borrowing costs and, in a vicious spiral, makes it even harder for indebted countries to pay.

Despite those dangers, European leaders are moving more slowly than expected in coming up with what to do about improving their management of the crisis and have put off a possible decision until next month.

"The eurozone debt and banking crisis could be entering a fresh phase and the markets are particularly vulnerable to disappointment given there's seemingly no consensus in the EU about what to do resolve the crisis, as well as opposition to the austerity in Ireland and Portugal," said Neil MacKinnon, global macro strategist at VTB Capital.

Discussions about how best to deal with the continent's sovereign debt crisis have split Europe. Broadly, some countries want more help for hurting eurozone economies while others - especially flourishing Germany, the bloc's paymaster - are more reluctant to shell out their taxpayers' money to rescue nations perceived as having been fiscally lax.

Portugal's government is determined to weather the storm, even though its borrowing costs have soared.

The yield on Portuguese 10-year bonds stood at 7.43 percent Wednesday, its ninth straight working day at more than 7 percent - a level the government has acknowledged is unsustainable.

The minority government has staked its reputation on avoiding a bailout, saying its austerity measures will put Portugal back on the path to fiscal health after racking up huge debts over the past decade of anemic growth. That economic record has alarmed investors and led them to demand higher returns for lending Portugal money amid wider fears about the euro's soundness.

Without firm European support, Portugal - one of the eurozone's smallest and frailest economies - is perilously exposed.

"The current level of interest rates show ... that the solution to this crisis of confidence lies not just with Portugal and that a European solution is key," secretary state for the treasury Carlos Costa Pina said. "Portugal is doing and will continue to do its work. Europe has come up short."

Portugal's economic difficulties are set to continue at least through the end of this year, the governor of the country's central bank said in an interview published Wednesday.

A recession in 2011 will be the price of the belt-tightening measures and fiscal adjustments, Carlos Costa told business newspaper Jornal Economico - contradicting the government, which has forecast growth of 0.2 percent this year, but in line with analyst predictions. Lower growth means less revenue to pay off the nation's debts, set to reach 89 percent of gross domestic product this year.

The National Statistics Institute, meanwhile, reported that Portugal's jobless rate last year climbed to 11.1 percent - the highest since it began collating figures in 1983.

The Portuguese, like the Greeks and Irish, are chafing at the debt-reduction measures.

Portugal has witnessed a wave of recent strikes against the austerity packages. Commuters endured a second consecutive day of misery Wednesday as train ticket collectors walked off the job, forcing the cancellation of most rail services after engineers staged a strike the previous day.

"I think that they are right to strike to show that we don't agree with everything the government does," Paula Carvalho, a 39-year-old commuter in Porto, Portugal's second-largest city, told Associated Press Television News.

In Ireland, too, the election campaign has brought an opportunity to voice discontent about how the taxpayers are propping up banks whose failure pitched the country into crisis.

But political experts largely expect Fine Gael, which is set to become Ireland's ruling party, to accept the bailout negotiated by outgoing Fianna Fail with all but a few modifications.

Heated talk of "German domination" and "burning the bondholders" is likely to evaporate once the ballots were counted, said Michael Marsh, a professor of comparative political behavior at Ireland's Trinity College Dublin.

"It's an election," he said. "Fine Gael is a relatively conservative, centrist party that in my view is in accord with, broadly speaking, most of the bailout package."