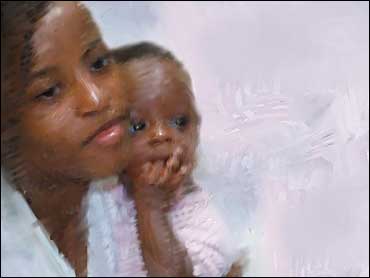 The number of black children living in extreme poverty has risen sharply since 1999, according to a report released Wednesday by a children's advocacy group.

About 932,000 black children under 18 lived in extremely poor conditions, up almost 50 percent from 1999 and about 25 percent since 2000, according to an analysis of Census Bureau data by the Children's Defense Fund. The number is at its highest level since 1979, the earliest figures available.

The increase came even though Census Bureau data released last September showed roughly 3.4 million black kids living in poverty in 2001, a steady decline steadily since 1993. That figure would include those considered to be in extreme poverty.

"It is shameful that one million black children are left behind in extreme poverty," said Edelman. "It is hard to be poor. It is harder to be an extremely poor black child in America when our president who says we should 'Leave No Child Behind' is proposing massive new tax breaks for the richest Americans. We need welfare policies that work in tough times as well as good times."

The Bush Administration claims its plan to dismantle, eliminate, cut and freeze essential services for children to pay for massive new tax cuts for the wealthiest Americans will spur the economy.

The most recent Economic Report of the president, which the president's own Council of Economic Advisers issued in February 2003, explicitly acknowledges that tax cuts are unlikely to pay for themselves -- let alone pay for investments in children and working families.

More than 8 percent of black children lived in extremely poor conditions in 2001, double the percentage for all races.