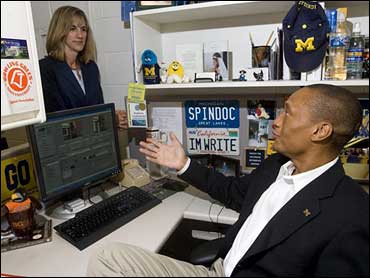 Nancy Kirk doesn't have anything against vacations; she just doesn't consider them worth the effort.

Years ago, when her children were young, she remembers spending a week at a cottage. Seven days of preparing meals in an unfamiliar kitchen and worrying about the kids falling into the lake led her to the conclusion that "there's no rest in this."

So instead of taking vacations, Kirk, 60, who owns an antique quilt and fabric business in Omaha, Neb., works down time into her everyday life — from taking an afternoon nap if she feels like it to occasionally tacking a day onto a business trip for sightseeing.

"I've designed my life to give me the freedom to schedule my own time," she said. "I don't want to separate work and the rest of my life like most people do."

Many Americans seem to eschew traditional vacations — a trend that has some experts worried that workers are not getting away from their jobs to relax and recharge, both physically and mentally.

The reasons vary, from having too few vacation days available to lacking money for travel. But in some cases, it seems, many people just aren't getting into the habit of getting away.

A recent study by Orbitz, the online travel company, found a drop in the number of people taking three-week or two-week vacations and an increase in those taking a week or less. One-third of respondents said they took five or fewer days of vacation in the past year.

One in four of those surveyed said they felt their bosses did not encourage them to take vacations, and one in three said they stayed connected with their office via phone or computer while on holiday.

"Our sense is that people are busier than ever with their lives, their family activities, their kids," said Jeanenne Diefendorf of Orbitz. "So they find it difficult to take an extended vacation and easier to balance if they're only gone a couple of days."

But, she added, "they're missing the benefits of unplugging from the workplace for at least a week."

Wallace Huffman, a professor at Iowa State University in Ames who is a specialist in labor economics, said Americans work longer hours than their European counterparts. While many Europeans take four to six weeks of vacation — often including the entire month of August when factories close — many Americans take no vacation at all, Huffman said.

He said it can be difficult for working couples to coordinate time off, and that some people worry that they'll fall hopelessly behind at work if they take even a few days off. There's also technology that can keep some people connected to their jobs 24 hours a day, 365 days a year — creating the sense they can never get away.

Huffman warns that there's a risk is not scheduling vacations.

"In the short run, it can reduce productivity," he said. "And people are living longer and have to think seriously about working more years," he said. "That means it's critical that people take periodic vacations that allow their minds — and their bodies — to rest."

For people like Kirk, the antique quilt expert, there were so many work and family activities to keep her busy that there wasn't time for vacation. In the 1980s, she and her husband Bill were starting their business. Then they adopted and raised two children while building the business, which included traveling to trade shows. He died of colon cancer in 2003; she's recovering from a heart attack two years ago and subsequent surgery.

"Two weeks sitting in the middle of London? I don't think so," she said. "The idea of staying at home is really, really appealing."

Jared Wadley, a senior public relations specialist at the University of Michigan news service in Ann Arbor, said he wasn't interested in vacations even as a child.

"I always worried I'd miss something interesting or important," he said.

Now 39 and married with young children, he still doesn't take traditional vacations — although he has more than 40 days of accumulated days due him.

He not a workaholic, he says, but instead paces himself so that leisure is part of his day-to-day life.

Wadley takes time during the day or after work to go to the gym. He takes the occasional half-day off during the summer to golf with his father. Weekends, he says, are about "quality time with my family." That means playing with his sons, who are 4 and 6, and getting them to soccer and T-ball games.

When the family travels, perhaps for a family reunion, he tries to time the trip so he's away from the office for no more than a day or two, he said. He takes a computer — or finds one he can use a couple of times a day to check e-mail — and stays in touch with his office by cell phone, he said.

He added: "I don't think it's bad to take vacation. You have to go with what works for you."