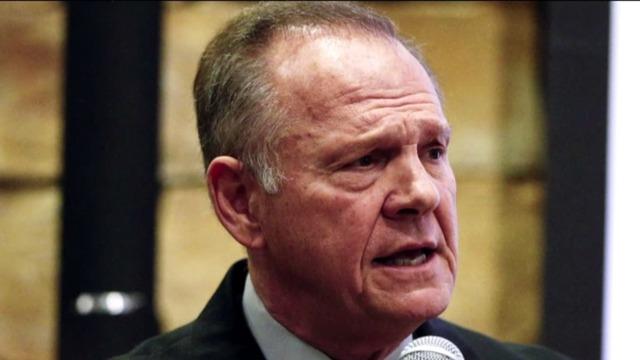 A woman accusing Republican Alabama U.S. Senate candidate Roy Moore of inappropriate behavior when she was a minor stepped forward with more evidence against the former judge Monday afternoon, according to The Washington Post.

Debbie Gibson, now 54, claims that she dated Moore as a 17-year-old when he was 34. Gibson was one of the first women to share her story of Moore's alleged sexual misconduct in The Washington Post's initial article revealing the claims of his pursuits.

Since the story's publication, a total of nine more women have shared similar stories of Moore's inappropriate behavior with underage teenage girls, including one who claims Moore touched her sexually when she was 14-years-old.

Gibson presented The Post with a high school "memories book" containing a graduation card from Moore. She says she happened upon the new evidence while searching for Christmas decorations in her attic.

"Happy graduation Debbie," the card in the scrapbook reads. "I wanted to give you this card myself. I know that you'll be a success in anything you do. Roy."

The card's slanted cursive writing bares a resemblance to evidence presented by Beverly Young Nelson, another Moore accuser. Nelson claims that Moore frequently visited a diner where she worked as a highschool student and one evening tried to force her to perform a sexual act while sitting in his car. In a November press conference, Nelson showed her high school yearbook with what she claims is Moore's signature

Gibson, who says that she and Moore dated and kissed with her consent, told The Post that she remembered receiving the card and writing this note below it:

"Roy Moore inspires me because he is such a successful man himself. Also, he is about the only person I know of who seriously believes in me. I appreciate that. He's got to be one of the nicest people I know."

Gibson's memories book contains a note regarding her first date with Moore in 1981.

"Wednesday night, 3-4-81, Roy S. Moore and I went out for the first time. We went out to eat at Catfish Cabin in Albertville. I had a great time.," she wrote, underlining "great" twice.

The accusations against Moore have caused several members of the Republican Party to denounce the Senate candidate, although President Trump endorsed Moore in a tweet Monday, saying "we need Republican Roy Moore to win in Alabama."

"He did not perpetrate sexual misconduct toward me, nor have I ever claimed that, but I now know sure that he is a liar," Gibson told The Post in response to Moore's claims that he does not know any of his multiple accusers. Gibson said she stayed in touch with Moore for years following their relationship, and would occasionally exchange Christmas cards.

Moore continues to deny the accusations and has indicated that he will not withdraw the race.

The special election for the Alabama Senate seat will be held on December 12.