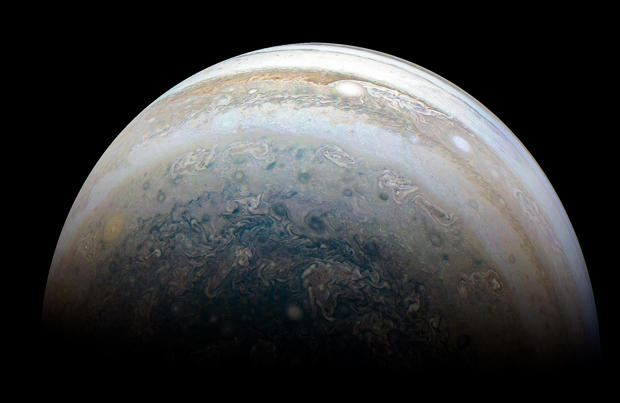 Astronomers searching for signs of a large planet far beyond Pluto have stumbled across 12 previously undetected moons orbiting Jupiter, pushing the giant planet's total to a record 79, the Carnegie Institution reported Tuesday.

"Jupiter just happened to be in the sky near the search fields where we were looking for extremely distant solar system objects," Scott Sheppard, leader of the Carnegie team, said in a statement. "So we were serendipitously able to look for new moons around Jupiter while at the same time looking for planets at the fringes of our solar system."

Nine of the newly discovered moons are part of an outer group that orbit in the opposite, or retrograde, direction of Jupiter's spin, taking about two years to complete one trip around the planet. The new moons were found in three distinct clusters and are thought to be debris left over when three larger bodies were broken apart in earlier collisions.

Two previously undetected moons were found closer in, part of a group that orbits in the same "prograde" direction as Jupiter's rotation. With orbital periods of about one year, they also are thought to be the result of earlier collisions.

Sheppard described the 12th new moon as an "oddball" with "an orbit like no other known Jovian moon. It's also likely Jupiter's smallest known moon, being less than one kilometre (0.62 miles) in diameter."

Dubbed Valetudo after the Roman god Jupiter's great-granddaughter, the tiny moon orbits in the prograde direction but at a greater distance from Jupiter, taking about a year and a half to complete one trip around the planet. As such, the orbit crosses those of the outer retrograde moons, raising the possibility of a possible head-on collision at some point in the future.

"This is an unstable situation," said Sheppard. "Head-on collisions would quickly break apart and grind the objects down to dust."