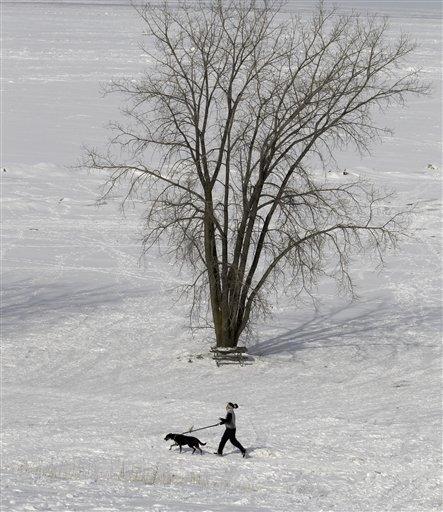 COLUMBIA, Mo. (AP) - A monster winter storm took aim at a third of the nation Monday, threatening to lay a potentially deadly path of heavy snow and ice from the Rockies to New England, followed by a wave of bitter, bone-rattling cold that could affect tens of millions of people.

Cities including St. Louis, Kansas City and Milwaukee could be hardest hit, with expected midweek snowfalls of up to 2 feet and drifts piled 5 to 10 feet. Even hardy Chicago could be in for its third-worst blizzard since record-keeping began.

"I wouldn't want to be on the road in open areas tomorrow night," said forecaster Tom Skilling of Chicago television station WGN. "I don't think I'd want to be driving in the city either. The fact is people die in these things. They skid off the road and go wandering around in whiteout conditions."

Warmer areas were not safe, either. The system could spawn tornadoes in parts of the South.

While record snowfalls have pounded the Northeast in one of that region's most brutal winters, the Midwest has been comparatively unscathed, until now.

At Edele and Mertz Hardware just a few blocks from the Anheuser-Busch brewery in St. Louis, customers lined up by 7 a.m. Monday waiting for the store to open. Snow shovels, ice melt and salt were all big sellers.

"'Freaking out' is a great way of putting it," employee Steve Edele said. "The icing - that's what scares people."

As the first flakes fell, transportation officials readied street-clearing equipment, and some airlines encouraged travelers to rebook trips leaving from Chicago. Airlines canceled thousands of flights ahead of the snow, and legislatures in several states decided to shut down altogether Tuesday or cancel committee meetings.

The National Weather Service suggested any Green Bay Packers fans planning to drive from Wisconsin to Dallas for the Super Bowl avoid leaving before Wednesday afternoon, when authorities hope to have cleaned up the worst of the mess along the route.

A blizzard watch was in effect for Tuesday and Wednesday for southern Wisconsin, northern Illinois and northwest Indiana. Winds could reach up to 60 mph in open areas and near Lake Michigan.

In St. Louis and much of Missouri, residents braced for a particularly hazardous mix: up to an inch of ice, followed by 3 to 4 inches of sleet, then perhaps a half-foot of snow or more. To the west in Columbia, Mo., forecasters predicted between 12 inches and 16 inches of snow, prompting the University of Missouri to cancel classes through Tuesday night.

Missouri Gov. Jay Nixon declared a state of emergency and activated 600 members of the National Guard.

In Chicago, forecasters predicted 20 inches of snow. If that holds true, it would be the city's third-biggest snowstorm, overshadowed only by the 21.6 inches in 1999 and the mother of all Chicago snowstorms, the 23 inches of snow that fell in 1967.

Forty-three winter storms have produced 10 inches or more in Chicago since record-keeping began in 1886.

Paula Lawson, a 59-year-old community organizer from suburban Glencoe, said she remembered the big storm in 1967, which "really did stop the world for days."

Will the latest storm do the same?

Even when the snow stops falling, the temperature will keep dropping.

Bitterly cold temperatures were forecast in the wake of the storm, with wind chills as cold as 40 degrees below zero possible in parts of North Dakota, South Dakota and other areas.

In Arkansas, most communities expected lesser amounts of snow, but the weather service warned of severe thunderstorms that could generate freezing rain, hail and isolated tornadoes.

On Monday, freezing drizzle coated roadways across the Plains. Two school buses in the Kansas City, Mo., area slid off icy roads. No one was seriously hurt.

In Michigan, two people were injured when a bus collided with a car in Detroit's northern suburbs.

A Wisconsin state trooper was struck and seriously hurt while directing traffic around another accident. In Minnesota, the state patrol reported hundreds of crashes statewide, including one that was fatal.

Elsewhere, dozens of day care centers and school districts in Kansas and Missouri canceled classes Monday. The 2011 Pork Expo in Peoria, Ill., was rescheduled for the middle of February.

Even Missouri's Department of Transportation - the agency responsible for keeping the state's highways clear of snow - decided to cancel a commission meeting scheduled for Wednesday in the state capital of Jefferson City.

The Oklahoma Blood Institute sought immediate blood donations, saying while its current supply is adequate, it could run low if the storm results in a significant slowdown in donations.

St. Louis-based utility company Ameren opened its emergency operations center amid worries that the weight of the ice and snow could bring down trees and power lines.

After burying the Midwest, the storm was expected to sweep into the Northeast, parts of which already are on track for record snowfall this winter.

In New Hampshire, where pedestrians have been forced to walk in the street in places because of piled-up snow, crews rushed to remove it before a new foot or so fell on the state.