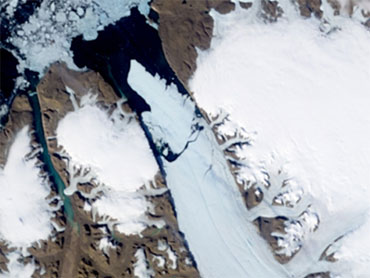 An island of ice more than four times the size of Manhattan is drifting across the Arctic Ocean after breaking off from a glacier in Greenland.

Potentially in the path of this unstoppable giant are oil platforms and shipping lanes - and any collision could do untold damage. In a worst case scenario, large chunks could reach the heavily trafficked waters where another Greenland iceberg sank the Titanic in 1912.

It's been a summer of near biblical climatic havoc across the planet, with wildfires, heat and smog in Russia and killer floods in Asia. But the moment the Petermann glacier cracked last week - creating the biggest Arctic ice island in half a century - may symbolize a warming world like no other.

"It's so big that you can't prevent it from drifting. You can't stop it," said Jon-Ove Methlie Hagen, a glaciologist at the University of Oslo.

Few images can capture the world's climate fears like a 100-square-mile chunk of ice breaking off Greenland's vast ice sheet, a reservoir of freshwater that if it collapsed would raise global sea levels by a devastating 20 feet.

The world's newest ice island already is being used as a powerful emblem in the global warming debate, with U.S. Rep. Edward Markey of Massachusetts suggesting it could serve as a home for climate change skeptics.

Researchers are in a scramble to plot the trajectory of the floating ice shelf, which is moving toward the Nares Strait separating Greenland's northwestern coast and Canada's Ellsemere Island.

If it makes it into the strait before the winter freeze - due to start next month - it would likely be carried south by ocean currents, hugging Canada's east coast until it enters waters busy with oil activities and shipping off Newfoundland.

"That's where it starts to become dangerous," said Mark Drinkwater, of the European Space Agency.

The Canadian Ice Service estimates the journey will take one to two years. It's likely to break up as it bumps into other icebergs and jagged islands. The fragments would be further ground down by winds and waves and would start to melt as they move into warmer waters.

"But the fragments may still be quite large," warned Trudy Wohlleben, a Canadian ice forecaster, who first spotted the massive chunk of ice on satellite images last Thursday.

The chunks of ice could be large enough to threaten Canada's offshore platforms in the Grand Banks off Newfoundland, said Wohlleben.

And, while it's possible to redirect smaller icebergs, by towing them or spraying them with water cannons, "I don't think they could do that with an iceberg this large," she said. "They would have to physically move the rig."

Moving an offshore platform is time-consuming and expensive - and very complicated in cases where they are fixed to the ocean floor.

While Greenland's glaciers break off thousands of icebergs into Arctic waters every year, scientists say this ice island is the biggest in the northern hemisphere since 1962.

It contains enough freshwater to keep the Hudson River flowing for more than two years, said Andreas Muenchow of the University of Delaware.

The drifting ice sheet is likely to remain at the heart of the global warming discussion during its journey.

While experts say it's difficult to directly tie the giant ice island to climate change because there are so many factors that affect glaciers in the area, the unusual event coincides with worrisome signs of warming in the Arctic.

Since 1970, temperatures have risen more than 4.5 degrees in much of the Arctic - much faster than the global average. In June the Arctic sea ice cover was at the lowest level for that month since records began in 1979, according to the National Oceanic and Atmospheric Administration.

The retreat of Greenland's glaciers, which has accelerated in recent years, is one of the least understood pieces of the climate puzzle.

A team of climate scientists who visited the Petermann glacier last year, expecting it to crack then, is now planning another trip within weeks.

"We did leave behind a couple of time-lapse cameras and 11 GPS (devices). Now we are scrambling to get up there and recover the data," said Jason Box, an expert on Greenland glaciers from the Byrd Polar Research Center at Ohio State University.

Box and two British researchers traveled to the glacier last year with Greenpeace activists who offered space aboard their ship, the Arctic Sunrise, to scientists studying climate change.

They were hoping to capture the event with cameras rolling, which would have been a powerful image just months before the Copenhagen climate talks that failed to produce a binding treaty to reduce heat-trapping gas emissions.

"It would have been nice if it had broken off last year," said Melanie Duchin, who led that Greenpeace expedition. "I mean ice melting, it doesn't get any simpler than that."

Still, she finds it ironic that the Petermann breakup coincides with another catastrophe linked to fossil fuels. The Arctic Sunrise is now in the Gulf of Mexico, surveying the massive oil spill from the Deepwater Horizon blowout.