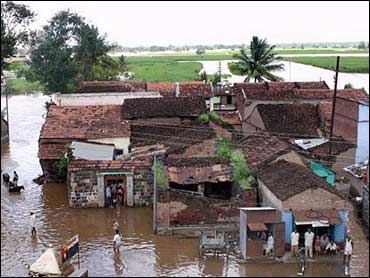 Rescuers found more than 100 bodies in the debris of destroyed homes, raising the official death toll to 853.

Chief Secretary Prem Kumar, the state's top bureaucrat, said the final death toll in Maharashtra state from this week's monsoon floods could be more than 1,000 because rescuers feared more bodies are still buried under debris in remote areas.

"It could increase by 100 to 150. That's the rough estimate," Kumar said, saying rescue work was mostly over and officials were now focusing on providing relief for survivors.

Rain showers began intermittently hitting Bombay and its outlying areas again Saturday, though with far less force than earlier in the week.

While some shielded themselves from rain with plastic shields, others simply got drenched as they demonstrated outside civic offices demanding the immediate cleaning of the city.

"For so many days we have been lifting the bodies of the dead and now we are clearing animals from the roads. Is this our work?" asked a furious Hafeez Irani, his face covered with a handkerchief to keep out the smell of rotting garbage and dead animals.

"The drains are choked. We still have no electricity," said Irani, a construction worker. "Can you get this foul smell? We have these handkerchiefs on all the time," he said.

Civic leaders pleaded with protesters and called for patience, claiming that equipment and workers to clear roads and drains were being called in from other areas hit by landslides.

Most of the deaths occurred due to landslides and flooding after Tuesday's torrential 37 inches of rain cut off the state from the rest of the country.

Four days after the deluge, government and relief officials said there was little likelihood of finding any survivors.

The government issued orders stopping all construction work in the city so trucks could be used to transport garbage, debris and animal carcasses, mostly of cattle that can be found wandering in most Indian cities, said Satish Shinde, a civic official.

Newspapers have carried warnings about leptospirosis, an infection caused by water contamination. State-run hospitals and health centers geared themselves to distribute free medicines and injections to check any outbreak of disease.

The miserable conditions in Bombay's northern suburbs were heightened by the presence of dozens of cowsheds near the shanty townships and residential apartments. The flooding resulted in the deaths of hundreds of livestock and cattle.

As many as 409 people were killed in Bombay, most either drowned in the floods, buried in landslides or electrocuted.

But despite renewed warnings from authorities to move, residents in shanties built into small, crumbling hills in the city's northern neighborhoods say they have no place to go.

"We came from the village because there is no work there. This is our home now," said Sakina Yusuf, a housemaid with three children. "I know they say it's unsafe...But move where?"