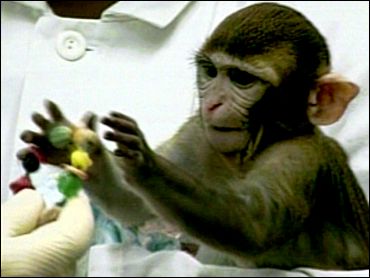 Monkeys with brain implants were trained to move a robot arm with their thoughts, a key advance by researchers who hope one day to allow paralyzed people to perform similar tasks.

A series of electrodes containing tiny wires were implanted about a millimeter deep into the brains of two monkeys. A computer then recorded signals produced by the monkeys' brains as they manipulated a joystick controlling the robotic arm in exchange for a reward — sips of juice.

The joystick was later unplugged and the arm, which was in a separate room, was controlled directly by the brain signals coming from the implants. The monkeys eventually stopped using the joystick, as if they knew their brains were controlling the robot arm, Duke University researcher Miguel Nicolelis said.

"So we realized she had got it. That she had learned that our computer models were reproducing those movements very precisely. And she could actually play the game just by thinking about it," Nicolelis told CBS News Correspondent Mark Strassmann.

"We couldn't believe it, it was almost like the monkey was telling us, 'Believe me, I can do it.'…She was very happy; she was very enthused about the fact she could do it." The second monkey also stopped using the joystick.

The work was reported Monday in the first edition of the journal PLoS Biology, a free, peer-reviewed scientific journal published online by the Public Library of Science.

The Duke researchers had previously wired the brains of monkeys to allow a robotic arm to mimic motions made by the monkeys when using a joystick or reaching for food.

Humans have already been implanted with a similar device that allows them to control the movement of a cursor on a computer screen through their thoughts. The implant used in the monkey work, however, is smaller and the task accomplished was more complex.

The Duke researchers have now moved onto researching similar implants in humans, and Nicolelis said he is more optimistic about the prospects for use in humans.

"It could do a lot of things, wheelchairs, computers, prosthetic arms, perhaps their own arms," Nicolelis said.

Appliances, remote objects in other locations in the house and robots all could be controlled, he said.

"It really opens the possibilities, and it reduces the amount of time. Previously, I had thought it might be five to 10 years before we could apply this to humans. I'm getting more optimistic now, I think in a couple of years we may be doing the real clinical trials."

The implants remained in the Duke monkeys for 2½ years showing they can be used for extended period. Over time, the monkeys' brains adapted to treat the robotic arm as if it was their own limb, Nicolelis said.