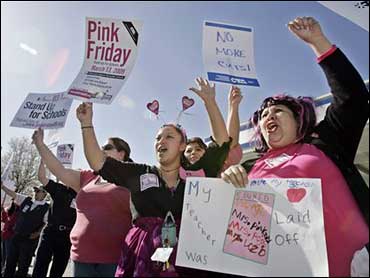 President Barack Obama promises his economic stimulus law will save hundreds of thousands of teaching jobs, but some states could end up spending the money on playground equipment or wallpaper - and the president might not have the authority to stop them.

Mr. Obama says nearly all of the education money in the Recovery Act, which will start going out to states this week, is designed to retain teachers.

Education Secretary Arne Duncan threatens to "come down like a ton of bricks" on anyone who defies the administration's plans to bring relief to states like California where 26,500 teachers have gotten pink slips. Across the country, 9 percent of teachers - about 294,000 - may face layoffs because of budget cuts, according to a University of Washington study.

But plans for the money are pulling in other directions, particularly in states with Republican governors: