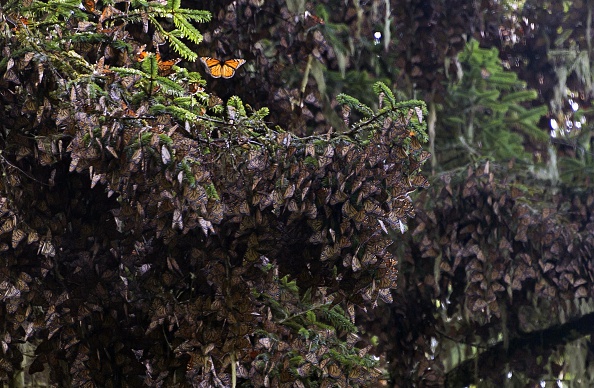 Monarch butterflies increased in their wintering grounds in the forests of Mexico this year, according to a wildlife survey -- a positive sign after worrying declines in recent years.

The population of the orange-and-black butterflies was three and a half times greater than last winter and covered almost 10 acres of forest, according to data collected by the World Wildlife Fund Mexico. (Since the butterflies cluster so densely among the pines and firs, they are counted by area rather than by individual insects.)

While this gives reason for hope, scientists caution that the future of monarchs remains uncertain: Their numbers are not nearly as high as they were 20 years ago, when the winter population covered as much as 44 acres.

Monarchs, which migrate between 1,200 and 2,800 miles from the United States and Canada each year, have suffered due to a decline in milkweed plants, which the insects need to feed and lay their eggs on. Milkweed has been destroyed by pesticide use or plowing and land development.

"The widespread use of increasingly deadly pesticides is a death knell for monarch survival. We need to scale back the use of these pervasive pesticides and plant more milkweed to keep these incredible creatures alive and thriving," Sylvia Fallon, senior scientist with the Natural Resources Defense Council, said in a statement.

Omar Vidal, Director General for WWF-Mexico, said in a statement, "Now more than ever, Mexico, the United States, and Canada should increase their conservation efforts to protect and restore the habitat of this butterfly along its migratory route."

That initiative budgeted $2 million to plant milkweed on more than 200,000 acres of land, especially along the I-35 corridor from Texas to Minnesota, which provide important spring and summer breeding habitats along the butterflies' main migration route.