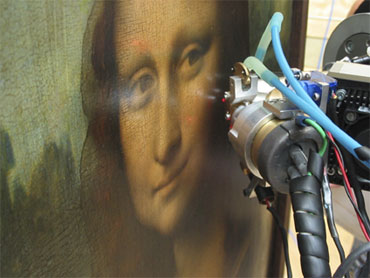 ROME - Forget her smile. An Italian researcher says the key to solving the enigmas of "Mona Lisa"' lies in her eyes.

Silvano Vinceti claims he has found the letter "S" in the woman's left eye, the letter "L" in her right eye, and the number "72" under the arched bridge in the backdrop of Leonardo da Vinci's famous painting. According to the researcher, the symbols open up new leads to identifying the model, dating the painting, and attesting to Leonardo's interest in religion and mysticism.

This is just the latest theory about a painting that has never ceased to intrigue scholars, art lovers and casual viewers alike. Others have claimed the painting is really the portrait of a man, or a self-portrait, while speculation over the reason for the model's famously enigmatic smile have ranged from pregnancy to mourning.

Some Leonardo scholars have expressed doubt over the new findings or their significance, with one calling them "unsubstantial."

The newly found symbols are not visible to the naked eye. Vinceti said Wednesday they are "very small, painted with a tiny brush and subjected to the wear and tear of time."

Vinceti has not studied the painting directly at the Louvre Museum, where it is on display. He said his research was based on high-definition scanned images from the Lumiere Technology in Paris, which specializes in digitizing artworks. Back in Italy, a Rome laboratory digitally excluded reflexes and other colors in the eyes in order to isolate the letters and make them stand out, Vinceti said.

The number "72" was recently found hidden in an arch of the bridge to the right of the model, he told The Associated Press.

Tradition holds that the "Mona Lisa" is a painting of Lisa Gherardini, wife of Florentine merchant Francesco del Giocondo, and that Leonardo started painting it in 1503.

But Vinceti said the "S" might refer to a woman in the Sforza dynasty that ruled Milan. Leonardo spent time there between 1482-1499 and then between 1506-1507, Vinceti said, which might change the date of when the painting was begun.

Vinceti said the letter on the painting is drawn in the same way Leonardo did in his writings. The letter "L" is for Leonardo, he said.

Vinceti and his group of historians and researchers are currently studying documents and making cross-references about Leonardo's movements and possible models. He said they expect to come up with a name for the model within weeks.

The number "72," Vinceti argues, is found in the Kabbalah, a form of Jewish mysticism, and in Christianity. Even when considered separately, "7" is full of symbolic associations in both Judaism and Christianity, for example to the creation of the world, and the number "2" may be a reference to the duality of male and female, said Vinceti.

The researcher said he remains open to other interpretations, but insisted that the "Mona Lisa" was more than just a painting for Leonardo - it was a "cultural will" of sorts.

"Leonardo did nothing by chance," said Vinceti. "He wanted to leave his final thoughts on his view of the universe."

Vinceti is the same researcher who has recently said he located Caravaggio's remains. He also sought to dig up Leonardo's body in France to conduct carbon and DNA testing.

Alessandro Vezzosi, the director of a museum dedicated to Leonardo in his Tuscan hometown of Vinci, was skeptical.

Vezzosi argued that multiple sources prove that the painting depicts a woman from Florence, saying the purported new symbols are insufficient to counter that evidence.

Claudio Strinati, an art historian and an official with the Italian Culture Ministry, said Leonardo's passion for the Kabbalah is well known. But he doesn't believe that Leonardo wanted to attach any symbolic meaning to the letters and numbers, otherwise he would have left better clues.

"Over the past decades there have been so many interpretations I don't even remember them all," Strinati told the AP. "We all think the (Mona Lisa) is this constant source of mystery. The truth is, when you set your mind to finding a secret, you can demonstrate whatever you want."