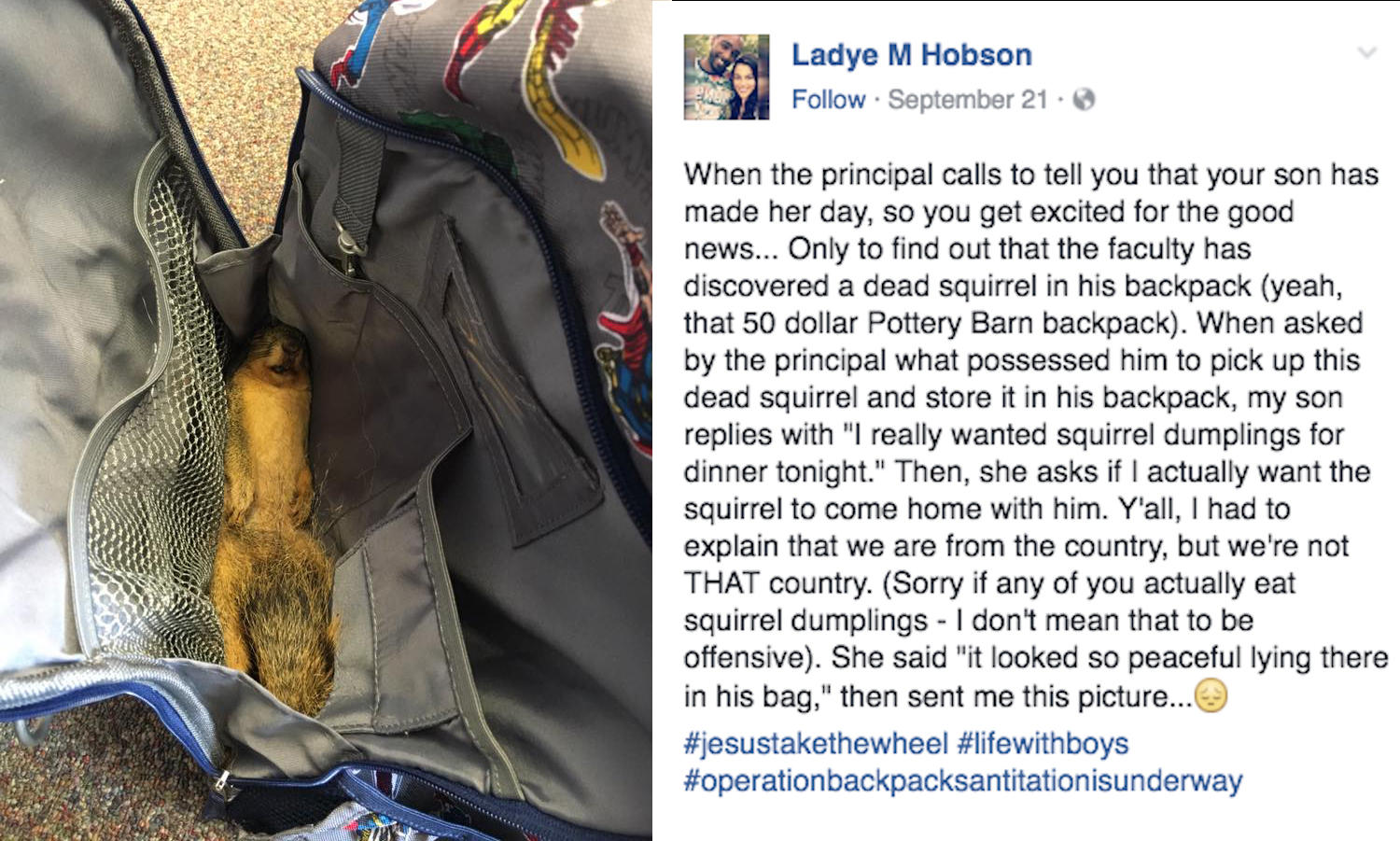 On September 21, Ladye Hobson was at work when she looked down at her cellphone and discovered that her son’s school was calling. Naturally, she expected the worst, bracing herself for bad news. Her 8-year-old son, Brylan, could be sick. He could have missed the bus. He could have been injured.

“Usually, principals don’t call moms for GOOD reasons,” she told CBS News. “So, I was a little worried.”

This time, however, Gayla Goff -- the principal at Brylan’s school in Oklahoma City -- told Hobson she was calling because the young boy had just made her day.

“When she said she called because Brylan made her day, I was like, ‘Oh thank God! And then the bomb dropped.’”

The bomb, as Hobson calls it, is the reason the principal was so amused. The school had just discovered a dead squirrel in her son’s backpack.

“Please pause here to imagine my horror,” Hobson says. “To say I am embarrassed is an understatement. I. Am. Mortified. A dead squirrel? Why is it in his backpack? How did the squirrel die? And WHY in the world would he try to keep this dead animal in his backpack?”

It turns out that little Brylan Williams, who is in the third grade, discovered the deceased critter in the grass just outside his school before class started. He then showed it to his best friend and word quickly spread throughout the whole school until a teacher got wind of the issue ... thankfully, not literally, despite the fact that the dead squirrel lay in Brylan’s backpack for six hours before it was discovered.

“Gayla asks permission to send me a photo because ‘it looks so peaceful lying there in his bag,’ Hobson recalls. “I hate how right she [was]  because the poor little guy really is cute. And dead. And crawling with bugs. And in my son’s backpack. Oh, may I also point out that this is the $50 Pottery Barn backpack with his name embroidered that I splurged on just two months ago?”

But wait, it gets even better. When the principal then inquired as to why Brylan was storing a dead squirrel in his backpack, he responded, “I really wanted squirrel dumplings for dinner.”

That, Hobson tells CBS News, was likely an idea planted by the boy’s “dear ol’ country grandparents.” She, however, has no intention of ever cooking up squirrel dumplings.

“I do cook,” Hobson says. “And even though I did grow up eating a variety of fresh meats, I never stray from beef, chicken, pork, and the usual seafood dishes. No squirrels are cooked by this mama!”

Brylan, for his part, was nearly brought to tears by the experience. In fact, Hobson screenshot the frantic texts he sent her way right after it happened. “I’m so sorry mom,” he wrote, punctuated with dozens of crying emojis. And he wanted her to know, “I didn’t kill it mom.”

When he returned home that afternoon, she says, he was still apologizing profusely.

“I asked him if he had learned his lesson,” Hobson recalls. “Then, I laughed out loud and told him he gets a free pass on this one because it was just too funny that he was seriously wanting to eat it for dinner! I’m a pretty tough parent, but I couldn’t stay mad at him for this one.”

Poll: Over half of Americans have had falling out with family member
Christina Capatides