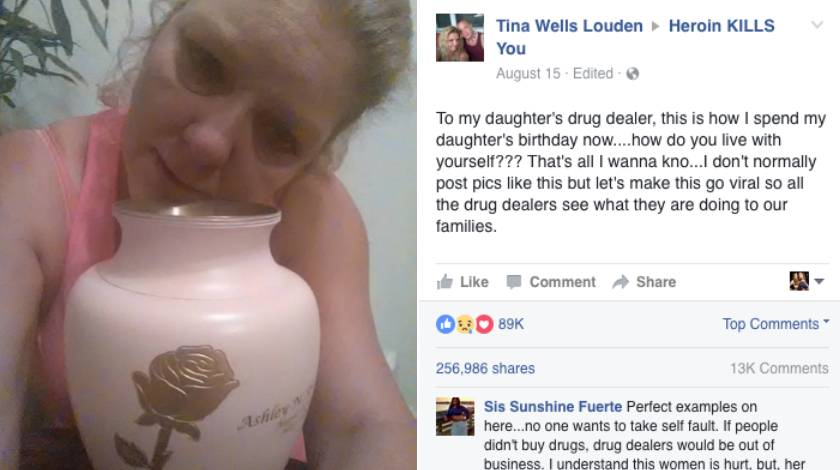 Instead of wrapping her arms around her bubbly “little girl” on her 28th birthday, Tina Louden clung to a light pink urn that held her daughter’s ashes.

For the past three years, she’s suffered through holidays and birthdays without her daughter, Ashley.

This year, on August 15, the tearful mom finally spoke out about Ashley’s untimely death -- in a scathing message to her daughter’s drug dealer.

“To my daughter’s drug dealer, this is how I spend my daughter’s birthday now,” she posted on the Facebook page Heroin KILLS you. “How do you live with yourself???”

That one question garnered an overwhelming response with more than 256,000 shares. People from across the country who have experienced the impact heroin can have on a loved one firsthand wrote to the mom from De Soto, Missouri, to applaud her bravery.

“I feel that drug dealers need to be held somewhat responsible,” Louden told CBS News. “They know they’re selling poison; they know it can kill them, and I wanted her drug dealer to see how my family suffers.”

Ashley started abusing prescription pills when she was just a teenager. Eventually, she moved on to heroin.

For five years, she tried to get clean -- not just for herself, but for her two little girls.

However, Louden says their family lacked the funds to help her seek professional help. And in the end, her beautiful daughter who could instantly “light up a room” lost her battle with addiction, dying a little over a month before her 25th birthday.

Louden is hoping her daughter’s story will help shine light on the epidimic that’s “wiping our children out.”

According to the Centers for Disease Control and Prevention, heroin use has more than doubled among young adults -- ages 18 to 25 -- in the past decade.

And similar to Ashley, more than 9 in 10 people who used heroin also used a least one other drug, the CDC reported.

“Drugs do not discriminate,” Louden said. “They take the rich and the poor, the good and the bad; it doesn’t matter who you are.

Like many other parents before her, Louden once told her daughter, “You know, I’m either going to visit you in prison or I’m going bury you.”

She was hoping it was going to be prison.

“Unfortunately, that’s not the route we went,” she said.

Now all Louden can do is share some advice for other parents who are in similar positions.

“Don’t ever give up on them. Don’t look down on them, and try to do whatever you can to get them the help they need,” she said.