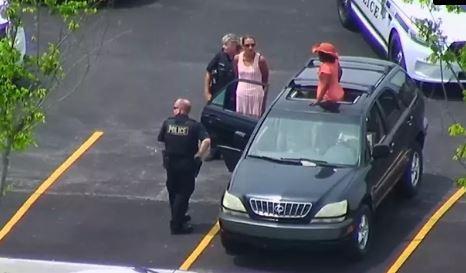 TULSA, Okla. — Tulsa police on Tuesday arrested a woman who they say bound and gagged her three daughters, stabbed the eldest repeatedly and set their house on fire. Police said a patrol officer found 39-year-old Taheerah Ahmad around midday in a vehicle in downtown Tulsa.

Ahmad was taken into custody and her 7-year-old daughter, who had been reported missing, was found safe with her, police said.

Tulsa Police Officer Jeanne MacKenzie said earlier that the 7-year-old girl helped her 9-year-old sister escape Monday night, and the 9-year-old ran to a nearby house for help. MacKenzie told the Tulsa World that when authorities arrived, they found an 11-year-old girl with so many stab wounds that emergency responders "couldn't even count them." The house was on fire, and Ahmad and the youngest girl were missing.

The middle child told police that their mother placed socks in their mouths, bound their hands with duct tape and began stabbing the eldest child, MacKenzie said.

The 11-year-old remained hospitalized Tuesday and police said she was unconscious and that her condition was "very severe."

Two women walking in downtown Tulsa said they saw the missing 7-year-old standing out of the sunroof of a vehicle, apparently playing, and a woman lying inside, reports CBS affiliate KOTV. The women recognized the vehicle from the Amber Alert and called 911, they told KOTV.

"We just happened to be walking by and, as moms, we both noticed a girl sitting alone, what we thought was alone, in a vehicle. And we kinda looked at each other and were like, 'Why is that little girl by herself?'" they said. "And then we heard somebody else laying down in the back seat, 'No, I think her mom's back there.'"

When they realized the child and the vehicle matched the description in the Amber Alert, they called 911.

The child appeared to be in good condition but was being checked out by medical personnel, the station reports.