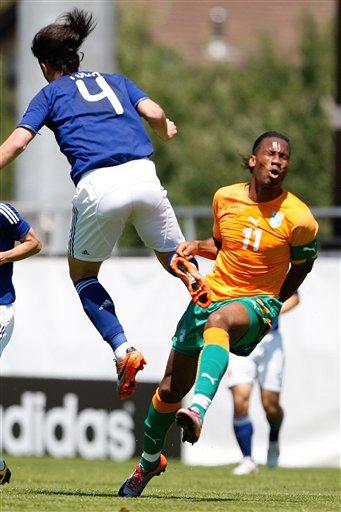 Newborns Gian and Francesca St. James were welcomed as celebrities Wednesday as their beaming mother, believed to be the oldest woman in American to give birth to twins, nestled them in each arm, as news cameras and microphones captured the moment.

Aleta St. James, who turns 57 on Friday, and the newborns faced a throng of news media in the lobby of Mount Sinai Medical Center.

"A lot of people may think I am selfish or crazy or whatever," said St. James, a day after giving birth. "Well, I'm a little bit crazy. I've never lived in the box. I just say if you have a dream, if you put your mind to it and don't listen to other people's negativity, you can really do incredible things."

Wearing a pink silk bathrobe, St. James choked up as she introduced her children - Gian, meaning "miracle from God," and Francesca, named after St. James' mother, meaning "love of freedom."

"This is the most incredible thing I've ever done in my life. This is a miracle that God blessed me with," she said.

Both newborns, who slept through the entire news conference, wore blue and pink striped knit caps, with Gian swaddled in a blue blanket and Francesca in a purple blanket.

Curtis Sliwa, who has an 11-month old son, said "I thought they would be two little peanuts wrapped up in a blanket but they look like they're ready for their mother to take them for a visit to the zoo."

Chester Sliwa said: "I feel great. I feel wonderful for my daughter."

Cohan, an actor and director from Los Angeles who attended the births, earlier Wednesday described the infants as they came into the world one minute apart.

"The girl came out first, kicking and screaming," Cohan told The Associated Press. "He is all boy, but obviously a gentleman - saying 'Ladies first."'

St. James gave birth through in vitro fertilization with donor eggs; she and Cohan said he was not the biological father.

"I'm in very good physical condition. I do emotional healing work. I knew I could do this," said St. James. "I knew I could give extraordinary things to these children. It took years for me to get to this level."

The single mom said she has the financial means to care for the twins, and has relatives and friends willing to help. She said she plans to continue to work.

In 2002, Marilyn Nolen, a former Olympic athlete and volleyball coach at St. Louis University, gave birth to twins at the age of 55. In 1998, Lin Fu-mei, of Taiwan, whose age was reported as 58 or 59, gave birth to two daughters.

In November 2002, a report published in the Journal of the American Medical Association said the USC program had achieved 45 live births, including 12 sets of twins, by women over 50.

The U.S. Centers for Disease Control and Prevention says 263 children were born to women between age 50 and 54 in 2002.

Except in rare cases, women over 50 cannot conceive with their own eggs; the pregnancies are achieved through in vitro fertilization with the egg of a younger woman.

Dr. Jane Miller, of Englewood, N.J., who performed the procedure on St. James, said she generally does not recommend later-age pregnancies because of possible medical complications, but she said that in St. James' case "there was no medical reason that would prevent a successful term pregnancy."

"We share in the joy that her new family will bring to her life," said Miller.