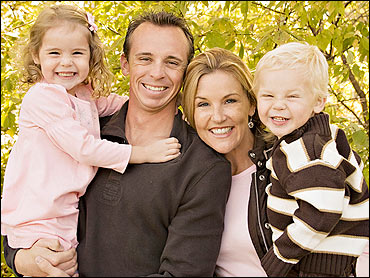 It's an international mystery: How did a U.S. family's Christmas card photo end up in the Czech Republic, splashed across a huge storefront advertisement?

Danielle Smith says the photo taken of her family last year got sent to family and friends, and was posted on her blog and a few social networking sites. The photo showed her and her husband Jeff holding their two young children.

About 10 days ago, one of Smith's college friends was driving through Prague when he spotted their huge smiling faces in the window of a store specializing in European food. He snapped a few pictures and sent them to a flabbergasted Smith.

"It's a life-size picture in a grocery store window in Prague - my Christmas card photo!" said Smith, 36, who lives in the St. Louis suburb of O'Fallon.

Her husband, Jeff Smith, told Early Show co-anchor Maggie Rodriguez Friday his first reaction when he heard what had happened was to be "absolutley flattered! ... As you can tell, I married up! And luckily, the children look like their mom. So, flattery was the first word that came to mind."

Danielle Smith has gotten 180,000 hits to her Web site since she posted the story recently about the well-traveled snapshot.

She says the photo wasn't used in an unseemly manner, it was just used to tell potential shoppers about the store's delivery service.

But, she told Rodriguez, what happened gave her "mixed feelings ... creepy, in the sense that it creates the idea of the potential of what's out there. This particular ad is benign. ... But the idea that someone can take the picture and use it in any manner they want -- that is the part that's a little bit scary .. to us."

Smith said next time she posts a photo on the Internet, she's going to lower the resolution or add an electronic watermark to make it hard to reproduce.

Mario Bertuccio, who owns the Grazie store in Prague, said the photo was from the Internet. Details were sparse, but he said he thought it was computer-generated. When told it was a real photo - of a real family - he said he started taking steps to remove it.

"We'll be happy to write an e-mail with our apology," said Bertuccio, who said he would send the Smiths a bottle of good wine if they lived in his eastern European country.

The Smiths and photographer Gina Kelly hadn't authorized anyone to use the pictures. Kelly said she has asked a professional photographers' organization to help figure out how her image wound up in Prague.