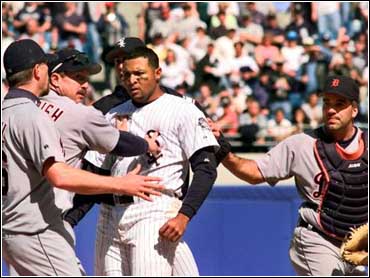 In what is believed to be the harshest penalty for a brawl in baseball history, 16 members of the Detroit Tigers and Chicago White Sox were suspended Thursday for a total of 82 games.

Managers Phil Garner of Detroit and Jerry Manuel of the White Sox were suspended for eight games each for Saturday's two fights at Comiskey Park. Tigers coach Juan Samuel must sit out 15 for throwing punches.

Detroit third baseman Dean Palmer, who charged the mound after being hit by Jim Parque in the first fight, was suspended for eight games. Parque got a three-game suspension.

Nine others were fined, ranging from $3,000 for Palmer to $500 for Detroit pitchers Danny Patterson and Jim Poole.

The penalties came a day before the White Sox were to start a series in Detroit. They were the first ones issued by Frank Robinson, baseball's vice president of on-field operations.

"Major league baseball wants to send a message - that participation in these sorts of incidents will be handled in a swift and serious manner," Robinson said.

"Altercations like the one that took place in Chicago last week show a lack of sportsmanship," Robinson said. "It sends the wrong message to our fans particularly young people. Fighting is not an acceptable part of the game."

Deciding discipline became his responsibility when commissioner Bud Selig dissolved the president's office in the AL and NL.

"We researched this as best we could, and we think this is the largest mass suspension ever," baseball spokesman Rich Levin said.

The players' union said it would not decide until Friday whether to appeal. The penalties would not take effect until appeals have been heard, and the suspensions would be staggered because of the number of players involved.

"I know our club would rather go out and just let the best team win," Chicago general manager Ron Schueler said before the penalties were announced. "We don't have to prove anything by going out fighting anymore. But knowing these bunch of kids, if somebody gets hit, you never know what's going to hapen."

Eleven people were ejected Saturday and the benches emptied twice first for 13 minutes in the seventh inning and then a second time for eight minutes in the ninth after two more Tigers batters were hit.

Palmer charged the mound in the seventh and was ejected following a rumble that started in the infield and spread to right field. Parque hit Palmer one inning after Jeff Weaver had plunked Lee, prompting an angry staredown.

Palmer, even though he'd been tossed, returned to the field when a second brawl erupted in the ninth, moments after Howry hit Shane Halter with a pitch. Earlier in the same inning, Sturtze hit Detroit's Deivi Cruz.

In 1998, fights at Kansas City and Yankee Stadium resulted in multiple suspensions.

Five players, including Orioles pitcher Armando Benitez, were suspended for a total of 18 games after a wild brawl against the Yankees.

Two weeks later, nine players and both managers were suspended for a total of 38 games after the Anaheim Angels brawled with the Kansas City Royals.