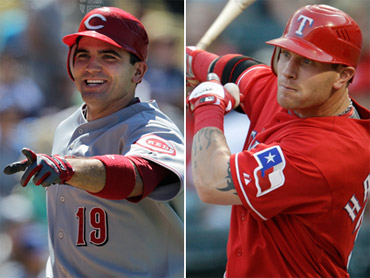 This story was written by CBSSports.com senior writer Danny Knobler

The pennant races seem to fade by the day.

Cool standings' computer tells us that six of the eight teams that woke up Tuesday morning in playoff positions were 90 percent or better to remain there through the end of the season. And the Twins, at 86 percent, weren't far behind.

The award races seem to get better by the day.

Has Joey Votto taken the lead for National League MVP over Albert Pujols? Did Carlos Gonzalez's clutch broken-bat triple late Monday night keep his chances (and the Rockies' chances) alive? Can Felix Hernandez become the first starting pitcher ever to win a Cy Young Award with a losing record? And how do you pick a favorite for NL Cy Young, or NL Rookie of the Year?

September could still be fascinating.

Of the eight major awards, the only two that look even close to being decided before the final month are for Manager of the Year, where Bud Black and Ron Washington are strong favorites.

The others will be decided in the final month, which isn't all that unusual.

A look back at recent MVP winners shows that nearly every one of them had a big September, and quite a few won because of September. Five of the last eight had final-month batting averages of .345 or better, and seven of the last 14 hit seven or more home runs in the final month. We remember Ryan Howard's great finish in 2006 (nine home runs, 21 RBI), but Alex Rodriguez was even better the next year (10 homers, 31 RBI), and Vladimir Guerrero won in 2004 because he hit .363 with 11 home runs and 25 RBI after Sept. 1.

Same goes for the Cy Young, where seven of the last 10 winners had three or more September wins. Even last year, when Zack Greinke's Cy case was built on his unbelievable start, he sewed up the award by going 3-0 with a 1.38 ERA in the last month.

And even some of those who just had decent Septembers won because they led their teams to great final months. Joe Mauer was helped by the Twins' September charge last year, as Justin Morneau was in 2006. And while Jimmy Rollins hit just .298 in September 2007, his Phillies overcame a seven-game deficit in the final 17 games of the season.

In most of the divisions, it'll take a charge like that to change who makes the playoffs this year. What's more likely is that someone breaks out of the pack to win one of the major awards.

A look at where things stand as September begins:

NL MVP: Votto (1.021 OPS) and Pujols (1.013) are the definite front-runners, and if Votto's Reds hold onto any of their six-game lead over Pujols' Cardinals, then Albert's two-year hold on the MVP could end. Gonzalez has great numbers, too, and if the Rockies find a way into the playoffs, he could still win. And shouldn't Adrian Gonzalez get consideration? Without him in the middle of the lineup, what separates the Padres from being the NL's version of the Oakland A's?

AL MVP: Miguel Cabrera has been the league's best player, but two guys could keep him from winning the MVP. One is Magglio Ordonez, because his July 24 injury ended the Tigers' hopes of contending (and helped lead to teams pitching around Cabrera even more than they already had). The other is Jose Bautista, because without him and his 42 home runs, Cabrera would still have a real chance at a Triple Crown. Cabrera could still win the MVP, but with the Tigers so far out of the race, Texas' Josh Hamilton probably enters September as the favorite. Mauer, Robinson Cano, Evan Longoria and even Paul Konerko aren't out of it, though, so the final month should be the decider.

NL Cy Young: As of Tuesday morning, the top six guys in the NL ERA race were within 0.09. And that doesn't even count Ubaldo Jimenez, the early-season Cy Young favorite who still has a chance to win. If anyone has an edge heading into September, it's probably Roy Halladay, but with so many great candidates so close, it would figure that one of them would have a super September and take the award. Besides Halladay and Jimenez, the prime contenders are Adam Wainwright, Josh Johnson, Tim Hudson and Mat Latos, in no particular order.

AL Cy Young: It's not as jumbled as the NL race, but it may be more fascinating, because of Hernandez. He finally got to .500 by beating the Red Sox in his last start, but there's no guarantee he'll stay there -- even if he stays as dominant as he's been. Over his last seven starts, King Felix is 3-4 with a 1.60 ERA. If you don't count wins and losses (and more and more voters don't), Hernandez may be the favorite as it stands now, but CC Sabathia, David Price, Cliff Lee and Clay Buchholz can still be considered serious contenders, and it's close enough that even Trevor Cahill, C.J. Wilson or Jon Lester could win it with a great September.

NL Manager of the Year: Unless the Padres fold (despite a five-game losing streak, they still held a five-game division lead as of Tuesday), Black almost has to win. That's great for him, but too bad for Dusty Baker, who has done a nice job in Cincinnati, and for Bobby Cox, who would have been a great sentimental pick in his final year with the Braves.

AL Manager of the Year: Funny how no one mentions the Ron Washington cocaine story anymore. Instead, the Rangers get credit for sticking by a manager who has had them in first place since early June, and Washington deserves credit for (almost certainly) taking Texas to the playoffs for the first time in more than a decade.

NL Rookie of the Year: Jason Heyward was winning in "a boat race," as then-Marlins outfielder Cody Ross said in early June. Maybe he still wins, because Heyward has gotten red-hot again with a .531 average, four home runs and nine RBI in his last eight games. Still, he struggled (and was hurt) long enough to open up the race, and there are tons of great candidates, from Buster Posey in San Francisco to Jaime Garcia in St. Louis to Mike Leake in Cincinnati to Starlin Castro in Chicago and Gaby Sanchez and Mike Stanton in Florida. It's such a strong group that two of the most-talked-about rookies, Stephen Strasburg and Aroldis Chapman, likely won't get any votes.

AL Rookie of the Year: No, it's not nearly as strong or deep as the NL group, but there's still a race -- maybe even a three-way race. The leader right now is probably Neftali Feliz, whose 33 saves in 36 opportunities are a big part of the reason Texas took over the AL West (after opening day closer Frank Francisco proved to be a bust). There's also Austin Jackson, who has maintained a .300 batting average (and .360 on-base percentage) as the Tigers leadoff hitter, and has also been brilliant in center field; and Wade Davis, who has 11 wins for the Rays.