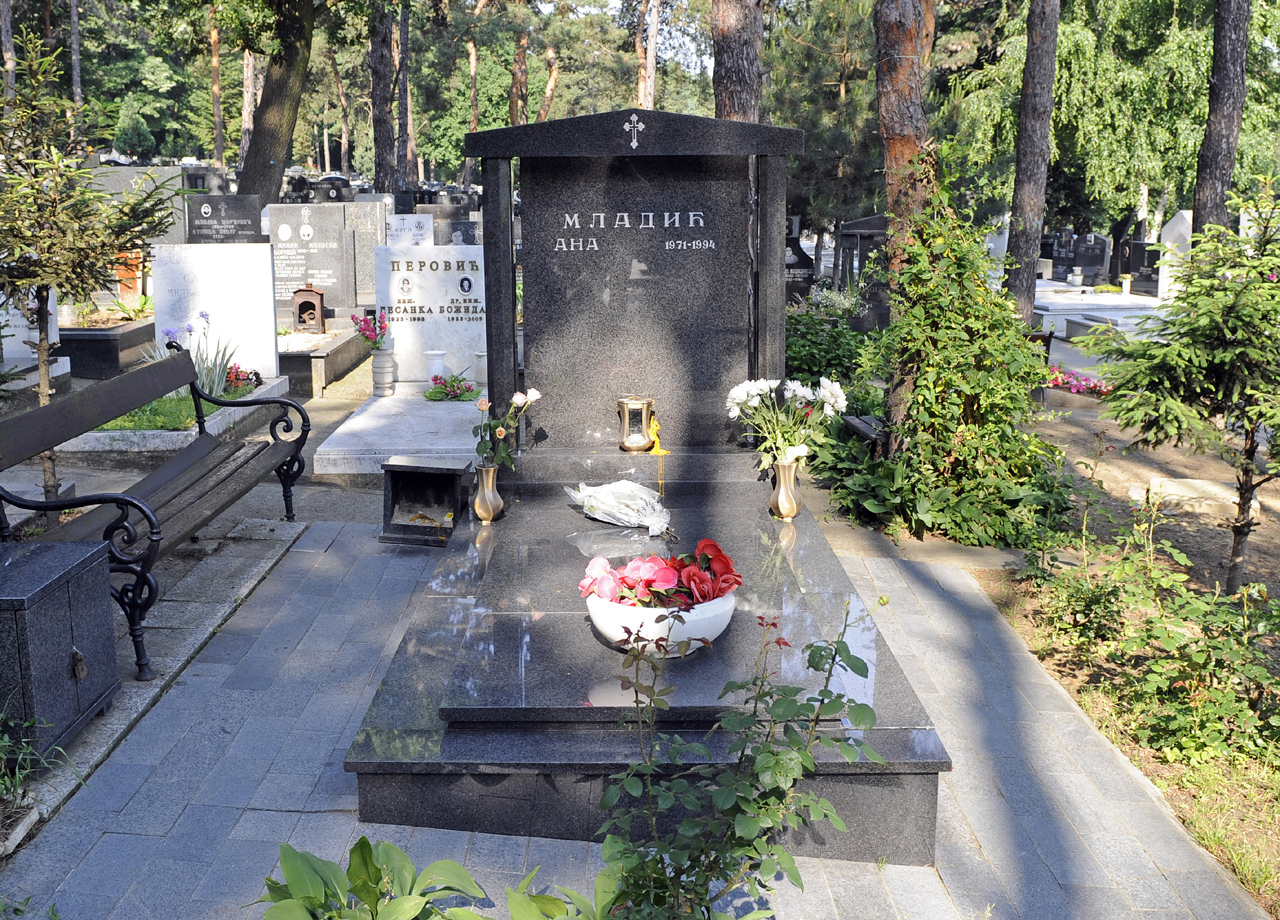 BELGRADE, Serbia — War crimes suspect Ratko Mladic on Tuesday was briefly let out of the jail where he awaits extradition to a U.N. tribunal, traveling in a secret high-security convoy to a suburban cemetery where he left a lone candle for the daughter who killed herself during Bosnia's bloody ethnic war.

The 69-year-old former Bosnian Serb general accused of some of the worst horrors of the 1992-5 war was accompanied by a convoy of several armored vehicles on a swift and quiet trip, said Serbia's deputy war crimes prosecutor, Bruno Vekaric. At the red marble grave, Mladic left a lit candle and a small white bouquet of flowers with a red rose in the middle.

"We didn't announce his visit to the grave because it is his private thing and because it represented a security risk," Vekaric said. "The whole operation lasted for exactly 22 minutes and passed without a glitch. He was at the grave for a few minutes."

Europe's most wanted war crimes fugitive could be handed over to the tribunal in The Hague, Netherlands as soon as late Tuesday or early Wednesday, officials said. A defense extradition appeal sent by mail arguing he is not mentally and physically fit to stand trial arrived at the Belgrade court Tuesday.

Mladic was arrested Thursday in a village north of Belgrade after 16 years on the run. He is charged by the U.N.'s war crimes tribunal for atrocities committed by his Serb troops during the war, including the notorious Srebrenica massacre that left 8,000 Muslim men and boys dead.

His 23-year-old daughter Ana committed suicide in 1994 with her father's pistol. Media reports at the time said she ended her life because of depression caused by her father's brutal role in the war. Mladic has always claimed she was killed by his wartime enemies.

Kadira Gabeljic, whose husband and two sons were killed in the Srebrenica slaughter, reacted with disbelief and anger at Mladic's visit to his daughter's grave, saying she almost fainted at the news.

"He was allowed to do it, and I am still searching for my children for the past 16 years — ever since Srebrenica happened," she said. She has only recovered some of the remains of her children, she said.

"My husband had been found, but what about my children?," she asked. "I will wait for years. I might even die before their complete remains are found."

Belgrade court spokeswoman Dusica Ristic said Mladic's formal appeal against extradition arrived at the court on Tuesday. The timing of the former general's handover now depends on when judges decide on the appeal — which is likely to happen quickly, meaning Mladic could be sent to the tribunal as early as Tuesday night or Wednesday morning, court officials say.

In addition to the appeal, Mladic attorney Milos Saljic has asked for a team of doctors to examine Mladic, who is said to have suffered at least two strokes.

Vekaric accused Mladic of using delaying tactics and said nothing should prevent his extradition to tribunal.

"Doctors are saying he's capable of standing trial," Vekaric said Tuesday, adding that Mladic will get proper medical checkups once he arrives to the U.N. tribunal's detention unit in The Hague.

The prosecutor said no one will be informed when Mladic will be transported from his prison and flown to the Netherlands "because of security risks."

On Monday, Serbian President Boris Tadic rejected speculation that authorities had known of Mladic's hiding place and delayed his arrest to coincide with a visit by EU foreign policy chief Catherine Ashton. The rumors have persisted because Mladic was found living not far from the capital, Belgrade, with relatives who share his last name.

"Any such comment makes no sense," Tadic said in an interview with The Associated Press. "The truth is that we arrested Ratko Mladic the moment we discovered him."

The president also said it's time for the European Union to do its part by boosting his nation's efforts to join the bloc, arguing the arrest of Mladic proves it is serious about rejoining the international fold.

"I simply ask the EU to fulfill its part," he said. "We fulfilled our part and we will continue to do so."

The EU had repeatedly said that Serbia could begin pre-membership talks only after it arrested the wartime Bosnian Serb commander. Some EU nations have already said Serbia needs to do more, including arresting its last fugitive, Goran Hadzic, who led Croatian Serb rebels during the 1991-1995 war.

Tadic said Hadzic will be arrested as soon as possible.