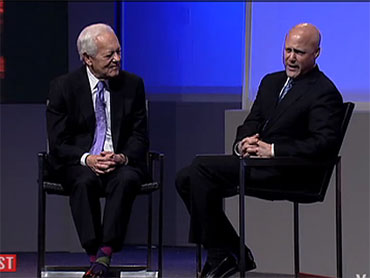 Amid the partisan vitriol that has increasingly become the norm in American politics, particularly during an election cycle, New Orleans Mayor Mitch Landrieu thinks his city's struggle to rebuild itself in the five years since Hurricane Katrina can provide the country a blueprint to "find herself again."

Landrieu was interviewed by "Face the Nation" moderator Bob Schieffer Thursday during a summit called "Reboot America," sponsored by the web site The Daily Beast. In his survey of the national mood, Landrieu said he thought "America feels small right now" because of "her inability to find consensus on any issue."

As a contrast to the present challenges, Landrieu harkened back to other seminal moments in the nation's history.

"When you look back at what we did after WWII with the Marshall Plan or you look at some of the work we did with the Tennessee Valley Authority [during the Great Depression] ... there was a time when America could summon all of her will, all of her might, all of her courage, all of her resources and do huge things."

Landrieu said New Orleans can serve the rest of the country as a "laboratory for innovation and change," and underscored the importance of rebuilding his city as a referendum on the nation's credibility.

"Hopefully they will take the opportunity to use New Orleans, because we're so small and we can figure out if something works or not ... to find out how America can do big things again and to restore her credibility on the international stage because our credibility has been challenged nationally and internationally by her inability to rebuild the city of New Orleans."

Watch the full clip below: