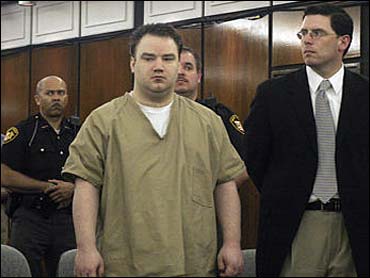 Prosecutors vowed to retry highway shooter Charles McCoy Jr. after a jury debating his fate was unable to decide whether to lock him up behind prison bars or in a mental hospital.

A hung jury was declared Sunday after four full days of deliberations in the trial of McCoy, 29, charged with 12 shootings that terrified commuters over five months in 2003 and 2004.

County Prosecutor Ron O'Brien said he would retry McCoy, who could have faced the death penalty if convicted of the most serious charge of aggravated murder for the November 2003 death of Gail Knisley, the only person killed in the shootings.

"I'm always disappointed because believe it or not I truly, honestly, and with every fiber in my body believe that the right verdict of this was not guilty by reason of insanity," defense attorney Michael Miller said.

Franklin Common Pleas Court Judge Charles Schneider will meet with the prosecution and defense Tuesday to determine what happens next. Schneider thanked the jurors for their attention and diligence: "All of you gave it your all."

McCoy's father, Charles McCoy Sr., also thanked the jury for its work and said his family's thoughts were with his son and the Knisley family. The jurors, who were first summoned April 8 and heard eight days of testimony, were escorted out of the courthouse at their request and did not comment.

According to the jury note read by the judge, the panel had voted on Friday and Sunday without reaching unanimous decisions on insanity on each count. "We have no indication at this time that this will change," the note said.

Juror Bobby Collins, a retired police officer, said he was "very disappointed" when reached later by telephone. He declined to discuss deliberations. "There will be another trial, and I don't want to taint that."

O'Brien said he would not offer any kind of a deal, reports Naureen Kocot of CBS affiliate WBNS-TV.

If no plea deal can be reached, a new trial will involve repeating more than two dozen witnesses. It also may mean forcing Mary Cox to listen again on the witness stand to her own 911 call during her best friend's dying minutes. She was driving Gail Knisley to a doctor's appointment when a gunshot pierced the door.

Finding an impartial jury will be difficult, too, reports Kocot. "Pretty much everyone in this country has heard the evidence from both sides and formed opinions."

McCoy, who remained mostly stoic throughout the trial, stared straight ahead as jurors were dismissed Sunday. Earlier in the case, he cried only when his parents testified about the start of his mental illness.

McCoy could have faced the death penalty if convicted of the most serious charge of aggravated murder for Knisley's November 2003 death. If found innocent by reason of insanity, he would be committed to a mental hospital until a judge ruled he was no longer a danger.

The defense admitted McCoy was behind the Columbus-area shootings, plus about 200 acts of vandalism involving dropping lumber and bags of concrete mix off of overpasses. But his attorneys insisted he did not understand his actions were wrong because of delusions from his untreated paranoid schizophrenia.

The defense psychiatrist said McCoy was desperate to rid himself of humiliating voices in his head that called him a "wimp" for not standing up to mocking from television programs and commercials. He also said McCoy believed others could read his thoughts.

The prosecution's psychiatrist said that, despite the delusions, McCoy showed he knew his actions were wrong by steps he took to avoid capture, such as leaving for Las Vegas when his father turned McCoy's guns over to police. McCoy was arrested a few days later, on March 17, 2004.

Residents and commuters were frightened for months as bullets struck vehicles and houses at varying times of day and night along or near Interstate 270, the highway that encircles Columbus.

A bullet missed Edward Cable by about 15 inches a few days before Knisley was killed. The retired prison guard testified at the trial and said he's ready to do so again if there's a retrial.

"This guy needs to be responsible for what he did," he said. "I'm convinced he knew exactly what he was doing every step of the way."