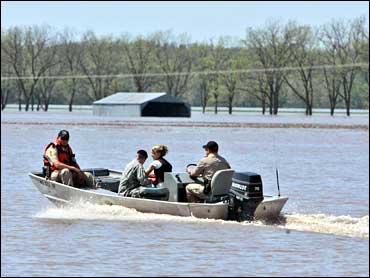 The Missouri River neared its highest point in the capital city Saturday, and forecasters said it wasn't nearly as bad as feared a few days earlier.

The river reached about 29 feet Saturday morning, about 6 feet above flood stage. That was high enough to flood stretches of the Katy Trail and to cover some low-lying roads and nearly 1,400 acres of farmland.

But it was not as dire as previous predictions of a 34-foot peak that could have wiped out many farmers' crops for the year and inundated the Jefferson City Airport.

The National Weather Service forecast moderate to major flooding along the Grand River near Sumner in north-central Missouri, where flood stage is 26 feet. The river rose to near 40 feet but had fallen slightly by Saturday morning and should keep dropping, the weather service said.

"They're getting some impact to the homes," National Weather Service hydrologist Mark Fuchs said. "They may be escaping the worst of it."

In 1993 the river at Sumner reached 42.5 feet, but nearly 40 feet marks the second-highest level going back at least 60 years, the weather service said.

Fuchs, in St. Louis, said levee breaks in the western part of the state earlier this week relieved the pressure and the height of the water as the river peak moved eastward.

"The bigger effects do not look like they're going to happen," Fuchs said. "Overall, this is a decent little flood but not anything to get real excited about. We're looking at largely minor inconveniences throughout the Missouri River east of Jefferson City."

The river was expected to peak in St. Charles on Monday at 29.6 feet. The river could start topping some levees at 34 feet, Fuchs said.

During the massive 1993 flood, the river reached about 40 feet.