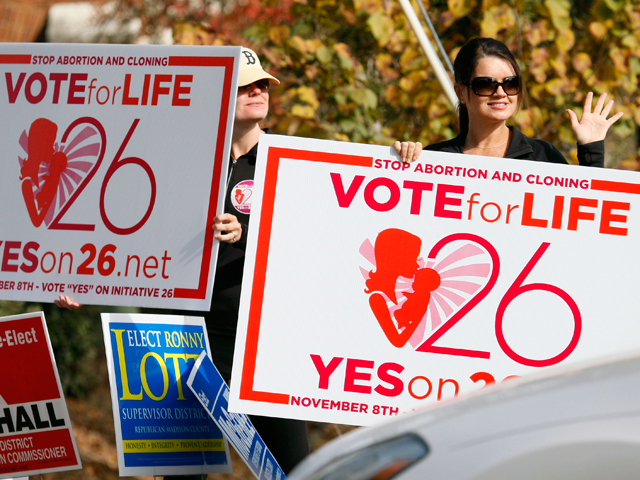 JACKSON, Miss. - Mississippi voters Tuesday defeated a ballot initiative that would've declared life begins at fertilization, a proposal that supporters sought in the Bible Belt state as a way to prompt a legal challenge to abortion rights nationwide.

The so-called "personhood" initiative was rejected by more than 55 percent of voters, falling far short of the threshold needed for it to be enacted. If it had passed, it was virtually assured of drawing legal challenges because it conflicts with the Supreme Court's 1973 Roe v. Wade decision that established a legal right to abortion. Supporters of the initiative wanted to provoke a lawsuit to challenge the landmark ruling.

The measure divided the medical and religious communities and caused some of the most ardent abortion opponents, including Republican Gov. Haley Barbour, to waver with their support.

CBS News correspondent Randall Pinkston reported earlier that the vote could set a precedent for the nation. The major concern for many regarding the strict law and new anti-abortion tactic was its possible affect on fertility treatments, especially for people like Atlee and Greg Breland.

"When I was 28-years-old, Greg and I were diagnosed with infertility," Atlee said. They used in vitro fertilization to conceive their 5-year-old twin girls. Atlee had worried the proposed state constitutional amendment could limit fertility treatments for other Mississippi couples.

"I don't want Mississippians to have to go Washington, D.C. or New York or California to have infertility treatment," she said.

Opponents said the measure would have made birth control, such as the morning-after pill or the intrauterine device, illegal. More specifically, the ballot measure called for abortion to be prohibited "from the moment of fertilization" — wording that opponents suggested would have deterred physicians from performing in vitro fertilization because they would fear criminal charges if an embryo doesn't survive.

Supporters were trying to impose their religious beliefs on others by forcing women to carry unwanted pregnancies, including those caused by rape or incest, opponents said.

Amy Brunson voted against the measure, in part because she has been raped. She also has friends and family that had children through in vitro fertilization and she was worried this would end that process.

"The lines are so unclear on what may or may not happen. I think there are circumstances beyond everybody's control that can't be regulated through an amendment," said Brunson, a 36-year-old dog trainer and theater production assistant from Jackson.

Hubert Hoover, a cabinet maker and construction worker, voted for the amendment.

"I figure you can't be half for something, so if you're against abortion you should be for this. You've either got to be wholly for something or wholly against it," said Hoover, 71, who lives in a Jackson suburb.

Mississippi already has tough abortion regulations and only one clinic where the procedures are performed, making it a fitting venue for a national movement to get abortion bans into state constitutions.

Keith Mason, co-founder of the group Personhood USA, which pushed the Mississippi ballot measure, has said a win would send shockwaves around the country. The Colorado-based group is trying to put similar initiatives on 2012 ballots in Florida, Montana, Ohio and Oregon. Voters in Colorado rejected similar proposals in 2008 and 2010.

Barbour, long considered a 2012 presidential candidate before he ruled out a run this year, said a week ago that he was undecided. A day later, he voted absentee for the amendment, but said he struggled with his support.

"Some very strongly pro-life people have raised questions about the ambiguity and about the actual consequences — whether there are unforeseen, unintended consequences. And I'll have to say that I have heard those concerns and they give me some pause," Barbour said last week.

Barbour was prevented from seeking re-election because of term limits. The Democrat and Republican candidates vying to replace him both supported the abortion measure.

Specifically, the proposed state constitutional amendment would've defined a person "to include every human being from the moment of fertilization, cloning, or the functional equivalent thereof."

The state's largest Christian denomination, the Mississippi Baptist Convention, backed the proposal through its lobbying arm.

The bishops of the Episcopal Diocese of Mississippi and the General Conference of the United Methodist Church opposed it.

Bishop Joseph Latino of the Catholic Diocese of Jackson, a church traditionally against abortion, issued a statement neither supporting nor opposing the initiative. The Mississippi State Medical Association took a similar step, while other medical groups opposed it.

Mississippi already requires parental or judicial consent for any minor to get an abortion, mandatory in-person counseling and a 24-hour wait before any woman can terminate a pregnancy.